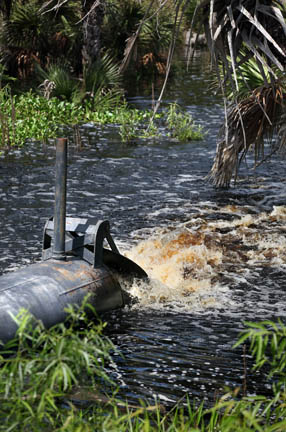 Striking a proper balance between what is correct for the environment, right for the Tribe and recommended by the South Florida Water Management District (SFWMD) while dealing with drainage is a day-to-day challenge, said Stacy Myers, assistant director of the Environmental Resource Management Department (ERMD).

“The first priority is the protection of lives and property. Second is pastures and animals,” he said. “But in any case, we do a good job.”

The wet season, from June through October, is demanding, Myers said. When flash storms dumped 14 inches of water on the Brighton Reservation in one week this summer, teams from operations and maintenance were ready to respond.

“Throughout the year they are charged with maintaining the existing drainage ways so that when there is a major storm we have adequate drainage. The average resident does not realize what goes on behind a very complicated process,” Myers said.

In Brighton’s Knott’s Landing section, workers placed boards over a walkway to allow residents to pass. At the new town home construction site, building stopped and electric pumps were used to remove water.

Workers shoveled sediment from the bottoms of canals to re-establish allowable drainage depths. Meanwhile, cattle and horses from several ranches were corralled to higher ground while frogs and water birds made themselves at home in flooded fields.

Through it all, projects continued to restore a deteriorated roadway culvert at another canal, to build retention ponds and to re-route the right-angled path of another canal into a curved, smoother flow.

At Flowing Well Grove, where rows of orange trees flourish, water was pumped to the B-9 canal which flows into B-4 and eventually Harney Pond Canal. A community pump, installed seven years ago to drain the main hub of the community into a community ditch, was closely controlled and monitored.

Water in Brighton is moved through a complicated built-as-needed system that eventually leads to an area dubbed “The Triangle,” where the main reservation canal and a private property canal meet a SFWMD canal that connects to Lake Okeechobee.

“We work hand in hand with the district,” Herrera said.

After every heavy rain, the agency liaison is called to initiate a chain of electronic commands that pulls plugs from reservation canals and allows the water to flow out. It works in reverse during times of drought when the SFWMD diverts water into the reservation.

Myers said rain on Big Cypress measured a tad less than Brighton, but a water conservation plan implemented for water supply, environmental reasons and flood control by the Tribe and the Army Corps of Engineers in the 1980s and 1990s redirects the rainwater into basins and conveyance canals so flooding is minimal.

But Big Cypress is not immune to rainstorm issues. The storms put the reservation, about 20,000 acres larger than Brighton and sitting at lower elevation, on water maintenance response.

Myers said workers used tools that resemble long sticks to pull plugs for drainage from canals into a basin on the north end of the reservation, and ERMD, with Big Cypress Councilman Mondo Tiger, is working on a plan to alleviate an area northeast of County Road 833 that is prone to flooding.

In Brighton, the drainage system is continually evolving, Herrera said.

“As business, home sites and Tribal facilities expand, we compensate,” he said.

For example, ongoing road work and construction along Harney Pond Road for the new Public Safety Administration Building required narrowing a drainage canal that runs parallel to the road. Herrera said the smaller canal could spur plans to install a retention pond. A retention area will also likely be needed to thwart future flooding at the townhouse site.

Myers said heavy rain and subsequent drainage challenges are “a common Florida thing” despite the natural wetlands of Big Cypress and Brighton.

“It’s the wet season in Florida and a lot of times this kind of thing happens. We live in Florida and we can’t rainproof the area; you just have to adapt to every situation and circumstance when they come up,” Myers said. “Fortunately, we have the people and the expertise to do it well.”