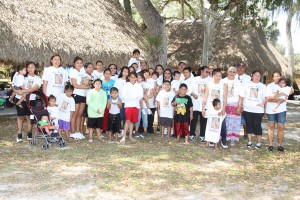 Family members and friends paid their respects to the honoree by participating in the 6th annual John Billie Sr. Horseshoe Tournament. John was known for his love of family and of playing horseshoes.

A table featuring framed photos and memorabilia of John made his presence known.

The friendly competition served as an outlet for participants to share fond memories of the late honoree, as well as for a chance to compete against each other for a year’s worth of bragging rights.

The gathering also included a traditional Seminole meal under the chickee, a bounce house for the youth and entertainment from the rock band Yardsale.

A family affair
John, a member of the Bear Clan, was born on Feb. 5, 1939. A lifelong resident of the Big Cypress Reservation, the late honoree showed an interest in the field of machinery and heavy equipment, as he began learning the operations of a tractor in his younger days.

John later became an entrepreneur, utilizing his years of experience in heavy equipment as a means to take care of his family.

He and his wife, Louise, were known to offer their hospitality to everyone affiliated with them, hosting many gatherings at the Panther Camp, specifically when it came to holidays and special occasions. The couple was also known for opening their home to children on the reservation.

Heather Billie, a granddaughter of John, talked about John’s desire for family bonding.

“We’re a very close family, so every day I had with my grandfather was a good one,” she said. “We would have gatherings like this at almost any event when he was here.”

She considered John as a breadwinner and a positive influence in the family.

“He made everybody feel special in their own way,” Heather said. “Even through my own mistakes, I remember him telling me it would be OK as long as I made things right. He was always around to encourage me.”

She said John always demonstrated love and affection for his descendants.

“When we were little, there was a time when we were playing in his boots,” Heather said. “When he caught us playing, he would dance with us and say that he loves us.”

Heather, who played in the family division of the horseshoe tournament, said horseshoes is a special game for her family.

“We love horseshoes,” she said. “My grandparents got all of us into it. They’re the ones that got this all started.”

Seniors’ special competition
John passed away on March 24, 2006, leaving Louise, a Panther Clan member, to carry on the family’s legacy.

Part of that tradition includes a seniors’ division of the John Billie Sr. Horseshoe Tournament. This year, the seniors-only competition, co-hosted by the Big Cypress Senior Center, took place on March 29 at the Big Cypress Culture Camp.

Big Cypress Tribal seniors played against each other throughout the morning in honor of John, including former Tribal Chairman Mitchell Cypress.

“We’re out here to celebrate the life of John Billie Sr.,” Cypress said. “He was a family man and a guy that we looked up to. He was an enjoyable gentleman to be around.”

“There was a song called Smiling Faces years ago,” Cypress said. “We would always say ‘Smiling Faces’ when he came around. He would laugh all the time when we called him that.”

“Louise really misses her husband, so when we have these tournaments, it makes her happier,” Cypress said. “People care a lot about Louise and her late husband. It’s a good thing for all of us to take part in.”