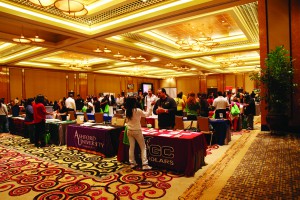 HOLLYWOOD — For the sixth year running, the Tribal College Career Fair brought the ambitious and curious to the Hard Rock.

All interested Tribal citizens in grades 9-12 and adults had another golden opportunity to meet representatives from 85 colleges, universities, Tribal departments, specialty or trade schools for information and one-on-one sessions on Oct. 14.

Johns said between 80 and 100 Tribal students pre-enrolled for the fair and included several Florida-based schools, as well as schools from the Midwest, South and Eastern areas of the U.S.

“We know exposure is the key,” Johns said. “It is the key to the successful paths they will take.”

Two new changes this year featured the creation of a new partnership between the Education Department and the Boys & Girls Clubs in Broward County with an estimated 300 additional students attending the fair, as well as the time frame moved up from January to October.

The increase in size comes on the heels of the Tribe and the Education Department continuing its relentless pursuit toward improving education with the Florida, Southern and Eastern college tours, as well as boasting 12 college graduates, 27 high school graduates and 48 General Education Diploma (GED) graduates (the highest number ever by the Tribe to date) this year.

“This type of event is beneficial to those who want it to be,” said Robbins, a future Psychology and Political Science major. “I wanted to see if there were new materials and ideas on what to do as a potential student. I want colleges that want me to be myself and that will give me a lot of options.”

“I wanted to see what they (college/university representatives) expect from a future applicant,” Osceola said. “It (the fair) has increased in colleges and universities and adding Ivy League schools made it more interesting, and it seems that it has also gotten broader.” The gifted writer hopes to attend Columbia University in 2014.

“I thought it was a great thing,” she said. “There was a diverse crowd and representatives.”

“This school was founded to educate Native Americans; why would a potential student want to go to any other school?” said Warriax, a 2006 graduate from the university. “We want to create a second home, a home away from home to help make students feel more connected.”

She said UNC Pembroke currently has a Native population of 18-20 percent and according to U.S. News & World Report ranks first in the South for student body diversity.

“I encourage you to go far and throw yourself into the college experience,” Hall said. “It is all preparation for life afterwards.”