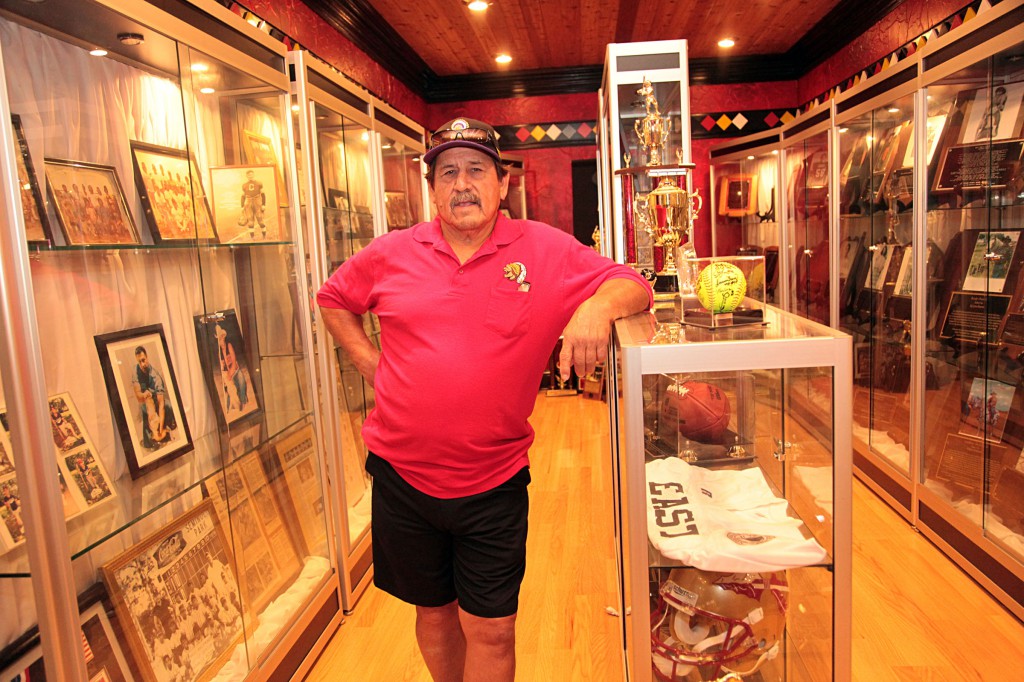 HOLLYWOOD — The Recreation program was founded in 1974 by Howard Tommie, Mike Tiger and Bert Jones but was inspired by someone who could be considered the Tribe’s version of Jim Thorpe.

Howard Tiger played semi-professional football, basketball, boxing and baseball, leaving behind a legacy of athleticism and competition for the Tribe. His nephew Moses Jumper Jr., who served as Recreation director for 38 years, knew preserving the history of athletics was important when he designed the Hall of Fame room in the Hollywood Gym in 1998.

“Sports teach character, teamwork, discipline and how to be a part of society,” Jumper said. “We’ve always been very competitive. People need to know the historical significance of sport.”

The Hall of Fame room may be small in stature, but it brims with the accomplishments of about 100 Tribal athletes. The display room filled with photos, plaques, trophies, sports memorabilia and vintage equipment honors athletes from the 1940s through the present day. A photo of the first inductees –  Eugene Bowers, Harry Billie, Coleman Josh and Joe Dan Osceola – has a special place in one of the display cases.

“We started this to give all our people a place to see our athletes,” Jumper said. “Young people come through here and see their parents, uncles and grandparents who played sports, too.”

New members of the Hall of Fame used to be added every year during a ceremony which included local coaches as guest speakers.

One year Florida State University football coach Bobby Bowden attended the induction ceremony. Inductees were chosen by a committee made up of Recreation site managers from each reservation, but no new honorees have been added in the last few years.

Inclusion in the Hall of Fame requires accomplishing something of significance in athletics, Jumper said. That could involve winning a spot on an all-county or state team, earning a letter, being a valuable team member in high school or college and promoting or playing sports within the Tribe.

“We all grew up together through sports,” Jumper said. “We’re still together and are leaders in the Tribe today. Sports teach leadership, the proof is right there.”

Members of the Hall come from a variety of sports: Howard Tiger played semi-pro football, boxing, baseball and basketball; Max Osceola, who played football, is also in the Broward County Sports Hall of Fame along with professional athletes; David Jumper was all-state in track and field; Josiah Johns was the Florida all-round rodeo champion and the first Seminole to compete in the Indian National Finals Rodeo; David Cypress was a wrestler; Leon Wilcox played baseball in the minor leagues and was a deep sea fisherman; Betty Mae Jumper played tennis and archery; Cicero Osceola played basketball.

“It’s important to remember the history and be able to look forward to the future of sports in the Tribe,” said Brian Dodd, Hollywood Gym site manager. “Some kids come through the Hall of Fame now, but we’d like to be able to do some more tours.”

Jumper would like to see the Hall progress but realizes it takes a lot of work.

He is willing to help out in any way he can.

“There are plenty of older people who can be added and we’d like to acknowledge the kids who are gaining prominence in the Tribe, state and nationally today,” Jumper said. “The goal is to keep this going. If we don’t, we’ve lost something as important as the things that are in our museums.”