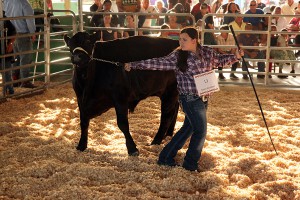 BRIGHTON — Animals of all shapes and sizes were on display at the 27th annual Seminole Indian 4-H Show and Sale in Brighton Feb. 11-12. Heifers, calves, steer, pigs, bunnies, chickens, sheep, turtles and even a few puppies headlined the event; but the real stars were the hard-working youth who cared for the animals over several months.

About 100 4-H children, from 5 to 18 years old, learned a variety of lessons while raising the animals. Each had to keep a record book of expenses and feed, water and exercise the animals daily. Children caring for the pigs and steer had to sell them at market.

“The kids did very well,” said Polly Hayes, 4-H coordinator. “We tell them this is a project and they don’t get to keep the animal. The first step is getting them used to the fact that the animals are going to market. They know what that means and they don’t like it at first. But they get used to the idea.”

Peewees, the youngest 4-H kids at 5 to 7 years old, showed small animals. At age 8, kids can get a pig for 90 days. Once they have experience with the smaller animal, they qualify for either a heifer or a steer the following year.

Roger Walters, of Fort Pierce, had his first pig at the show. He went to Brighton with his mother, Sheree Sneed.

“It’s fun to get to feed it and take care of it,” said Roger, 9, who kept his pig at the Chupco Ranch in Fort Pierce.

Other Fort Pierce 4-H members participated in the program, but their swine did not weigh enough to qualify for the show.

“We were pleased Fort Pierce got involved this year,” Hayes said. “They didn’t all make weight but they are ready for next year.”

The 180-day steer program begins in June or July, when each 4-H member purchases a calf from the Tribal herd of Brangus cattle. The calves weigh between 600 and 700 pounds. By the end of the program, the steer need to weigh more than 1,000 pounds to qualify for the show and sale.

The heifer program starts with a small calf and lasts four years. When old enough, the heifer is bred with a bull and brought to the show pregnant. The following year, the same heifer is brought back to the show with its calf. Five heifers were in the show; four had been bred and one had a calf.

“Kids who want to get into the cattle program usually start with heifers and breeding,” Hayes said. “It keeps increasing the herd. [The calf] can be put back in the pasture to be part of the breeding herd or sold.”

Kelton Smedley has participated in the heifer program for four years and showed his heifer and her calf at the show. The 16-year-old has had both steer and heifers in the program but prefers heifers.

“They are easier,” he said. “It’s easy to teach a heifer to use the lead; she was already broke when she was a yearling. It’s a four-year program and you have to stay on top of it. Once she is bred, you have to make sure she’s eating right and keep the coyotes away from the calf at night.”

Before the show, kids bathed and groomed their animals, making sure to keep them comfortable while waiting for their moment in the spotlight.

“My mom likes it because it keeps me out of trouble,” said Rayven, who showed a 1,123-pound steer in the show. “I also enjoy it. I like hanging out with my friends. It takes a lot of effort to feed and water and walk the steer around every day.”

“The hardest part is getting them used to the lead rope. You have to train it to be led,” she said. “The best part is bonding with it, even though you have to be ready to sell it.”

Not everyone who starts the program qualifies at the weigh-in the day before the show. Drayton Billie, 14, didn’t make it because his steer wouldn’t follow the lead rope. Despite that, he stayed to support his sister Breanna.

“It’s a bittersweet feeling,” the Okeechobee High School senior said. “Knowing next year I won’t show is hard because I enjoy showing. It really hasn’t hit me yet.”

Hayes was grateful to the seniors, who the younger kids saw as leaders.

“They were little when they started out and now the little kids look up to them,” she said. “It’s very rewarding to see them grow up to become responsible people.”

The day after the show was the sale, and every animal sold for a profit to Tribal members and outside vendors. Hayes credited the event’s success to the diligence of kids and staff and to a small army of volunteers who help out annually.

Norman Johns, the event’s ringmaster for 25 years, raised his children in 4-H, and now his grandchildren are in the program.