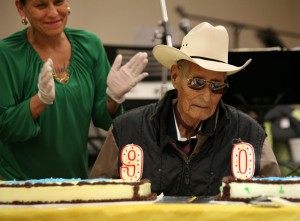 BIG CYPRESS — As birthdays go, Frank J. Billie celebrated yet another that loved ones predict will take the eldest male senior on the Big Cypress Reservation into his centennial – if he is not already there.

“I’m happy to have made it to this year and I will be back next year,” Frank said in Mikasuki, to reassure nearly 75 loved ones gathered Feb. 28 at the Senior Center for his 90th birthday.

With balloons, candles and two cakes that wished Frank a happy 9-0, the community celebrated his milestone – although no one really knows for sure, not even Frank, how old he truly is.

When Frank was a boy, in the days when his mother and father, Margaret Huff Dixie and John Billie, fled from U.S. troops into the Everglades, he and his sister Alice were assigned birthdays of Jan. 1, 1925 and 1923, respectively, by the government.

Big Cypress Councilman Mondo Tiger and former Chairman Mitchell Cypress, who both credit Frank as the prominent father figure of their youth, said Alice is likely more than 100 years old already and that Frank is not far behind.

But the recent party was not about numbers, said Lydia Cypress, Frank’s sister through Wind Clan lineage.

“It’s to celebrate his entire life and more of it to come,” she said.

Lydia Cypress laughed at a memory from her childhood, when she would trek down to Frank’s variety store, collect glass pop bottles and then cash them in to buy Kool-Aid.

His nephew, Thomas Watts Billie, who is 72, said Frank was the family disciplinarian then, a fact that Mitchell Cypress, who admits to being trouble, remembered in detail.

“He raised me and he disciplined me…and one day he got tired,” the former Chairman said.

He said Frank chased him with a stick through the village, through an open field, slipped like he was sliding into first base, got up and kept coming.

“He gave me a good whipping, but he gave me a home, a place to eat…we relied on him,” Mitchell Cypress said. “Anyone can father a child, but not everyone can be a dad.”

Councilman Tiger said Frank, who also worked construction for the Bureau of Indian Affairs, was a “big influence” and the reason he became a certified grade operator, just like Frank.

“’I’m making my rounds,’ he told me,” Councilman Tiger said.

Everyone, including Frank, laughed at the story.

The Rev. Salaw Hummingbird gave an invocation before lunch was served. The meal included traditional favorites like frybread, sofkee, lapale and chicken stew with cabbage.

Pastor Hummingbird recalled 2001, when he began leading Big Cypress First Baptist Church and had the pleasure of visiting Frank and listening to his stories about the past.

“I always enjoyed listening to him at (Billie Swamp) Safari,” the pastor said. “It’s good to see our men out there who went through so much. It’s because of the battles they fought that we have so much now. Even though his hair has long grown gray, there is so much wisdom there.”

Pastor Hummingbird thanked Frank for his life of service and told him that he was honored to be in his presence for his 90th birthday.