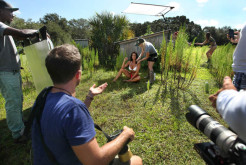 Panthers, bears and alligators were not invited.

The ninth annual bathing suit calendar featuring employees of Seminole Hard Rock Hotel & Casino Tampa was only the second to be photographed in nature and the first to be staged on a Seminole reservation, said Gina Morales, public relations manager of the Tampa Hard Rock venue.

“When we planned the shoot, we knew it would be unusual. But we took a gamble on the location and hoped the weather would cooperate,” Morales said.

It did. The four-day project, held Aug. 26-29, was rainless when it mattered most.

All 15 models are current Tampa casino employees who work “the front of the house” as cocktail servers, hostesses and card dealers. Candidates endured a critical selection process for the best in both beauty and personality.

“We call John ‘Papa Bear’ because he is so protective. Everything is done with professionalism, class and taste,” Morales said.

“Someone was always on site for compliance with shooting and that the work did not interfere with normal operations,” O’Donnell said. “But with all the work, it was always fun.”

Photographer Joey Wright provided direction to the models, who included college graduates and current college students. Most were new to modeling.

Jennifer Rossman, who posed for a second year, has a bachelor’s degree in biology. She uses her job as blackjack dealer to pay off college debt.

“It’s hard to get a job in my field that pays well, so for now the Hard Rock pays for school,” Rossman said. “Besides, it’s an honor to be in the calendar. You feel like a local celebrity.”

“We can take the girl next door and turn her into a supermodel, and on the other hand, we have nurses, teachers, therapists and a (pharmacist intern) who were models,” Morales said.

Plans to unveil the 2015 calendar will be announced soon. The models will then learn who was picked to grace the coveted centerfold. The centerfold model will receive $500 and a trip to Las Vegas.

The $10 calendars will be available in early December at the Hard Rock Store in Tampa.

“Just in time for the holidays, they make a great stocking stuffer for a really good cause,” Morales said.