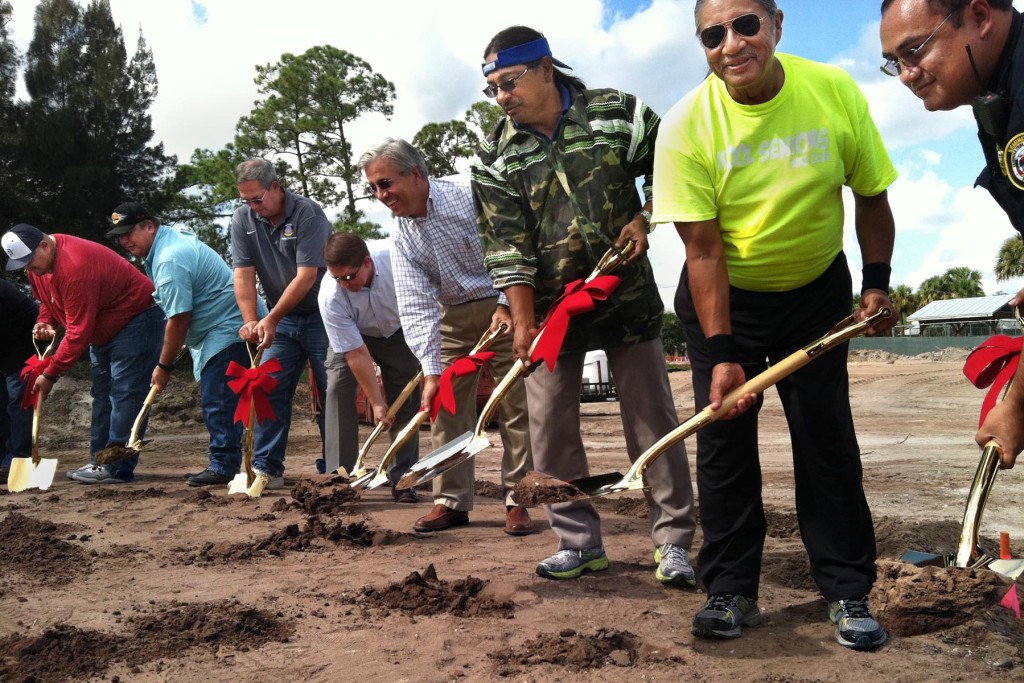 BIG CYPRESS — Decades ago, when Wovoka Tommie tested his youth with daredevil BMX tricks in the old skate park at Big Cypress, he was too much of a kid to imagine the future.

On Nov. 20, reminiscing at a groundbreaking ceremony on the same land for phase one of the Big Cypress townhome development, Tommie said the reservation – and he – had grown up.

“We’d have little derbies going on where we’d do these stunts called power sliding…now we’re using this place for something desperately needed – shelter,” Tommie said. “It’s good to see the community grow not in malls but in shelter for our people.”

About 50 people turned out to shovel the first dirt for the project at Eloise Osceola Street and Cypress Lane that Councilman Mondo Tiger said was on a wish list for nearly four years.

Located on three lots, the project will consist of three multi-family residential buildings when finished in August 2014. Two of the structures will be two stories with three units each. The third building will be a one-story, two townhome dwelling built to Americans with Disabilities Act requirements.

Councilman Tiger said about 60 families are waiting to apply for housing in one of the eight dwellings. Many of the families currently live off the Big Cypress Reservation in cities like Hollywood and Tampa, he said, but most are formerly of the reservation and are anxious to return.

“It’s a historic thing for us to start building and get people back to living on the rez,” Councilman Tiger said.

“It’s definitely not enough homes for everyone, but it’s a good start. In the future, we’ll see townhomes all the way down this side of the street and on the other side,” Osceola said.

Councilman Tiger and Mitchell Cypress, who was the Tribe’s Chairman when the idea for the townhomes was born, were applauded for seeing the project through several starts and stops. Cypress said Councilman Tiger picked up the ball when he was elected and did not let it go until plans were drawn and funding was provided.

“There’s always a tug of war at budget time,” Cypress said. “In this case, the better man won.”

Big Cypress Board Rep. Joe Frank was also lauded for his support of the plan. Rep. Frank said the lack of housing had created a “steady drain on the reservation” population, but the new townhomes – and hope for more – will lead to a bigger, stronger community.

All structures will be environmentally friendly, said Rick Gonzalez, of REG Architects, designers of the project. All appliances will be Gold Star energy efficient, the roofs will be metal for better cooling potential, windows will be made of high-grade impact resistant material and all carpets and interior paint will consist of low volatile organic compounds, or VOCs.

The Rev. Salaw Hummingbird, of Big Cypress First Baptist Church, called the project a privilege and lifted the gathering in prayer for the Creator to bless the site.

He compared the groundbreaking to the Old Testament story of Joshua and Caleb – that if men keep faith in God while enduring hardships toward what He promises, then they will be rewarded with victorious accomplishments.

“The Seminoles are truly fighters and what we see today is another stone that the Lord has laid for us,” Rev. Hummingbird said. “(The Seminoles) started with one little house here and look what they are doing now. . .It is a sign of what hard workers the Seminole people are and that we can still build on the future.”