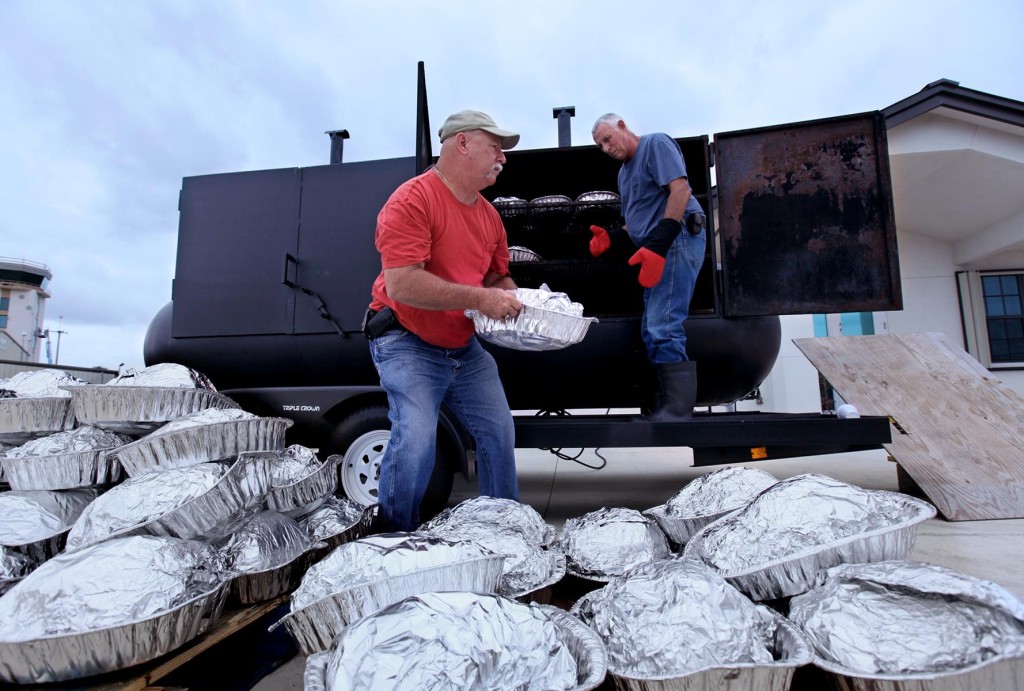 STUART — Seminole Fire Rescue Department’s chief of operations Jeff Alter takes three days off every year to prepare for Thanksgiving dinner, but when the time comes to dine, he’s all turkeyed out.

“I eat steak for Thanksgiving,” Alter said on day one, Nov. 25, of an annual project that makes sure nearly 50,000 people in Martin, St. Lucie and Indian River counties eat the holiday meal.

Alter, a four-year employee of the Tribe, is a member of the all-volunteer Big Heart Brigade. Created in 1992, the organization is operated by people who include corporate executives to stay-at-home moms, but it sizzles with help from scores of firefighters who prepare and distribute the meals.

Alter joined assembly lines of firefighters who stripped dozens of turkeys of giblets and necks, covered the gobblers in olive oil and Everglades seasoning, wrapped them in aluminum foil and placed each in its own cooking pan. Cases of stuffing, cranberry sauce, canned vegetables and other fixings were counted, divided and shared. Over the next two days, an extra-large outdoor oven, hand built by brigade members, cooked 60 turkeys at a time at separate locations in each county.

“We serve on and off duty,” said Renzo Urzola, a firefighter with Martin County Fire Rescue Station 30. “It doesn’t matter if we just came off a 24- or 48-hour shift; it’s the right thing to do.”

Alter said the bulk of needy families were identified by school police officers and guidance counselors. About 900 large, raw turkeys go to families who have utilities to cook them. The others receive cooked birds.

The firefighters also reach out to men and women who have served in the military. Individual meals are packaged and delivered to veterans from organizations including AMVETS, American Legion and Veterans of Foreign Wars.

For first responders and public safety workers who serve communities on Thanksgiving Day, meals were delivered to their doorsteps at fire stations and police stations in all three counties. In Martin County, deliveries went to ocean safety guards at lifeguard stands along the beach.

Firefighter Stuart Flank, of Martin County Fire Rescue Station 30, said he was bit by the holiday helping bug about five years ago when he saw his wife give a holiday basket that included toys to a family with a little boy.

Flank witnessed the joy that came over the boy’s face.

“The toy must have cost as little as $10, but the effect it had on the boy and me was priceless,” Flank said.

Alter said the firefighters’ urge to help feed the needy during Thanksgiving is “a natural extension of why we do what we do in the first place. We come into the profession to serve the community, but it becomes more than that.”