Skip to content
You are here
Home > Community > To South Dakota, with loving care 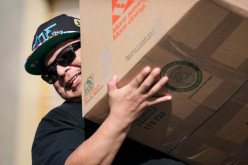 HOLLYWOOD — It didn’t take a jolly old man and a red-nosed reindeer to deliver tons of comfort just in time for Christmas to some of the poorest communities in Indian Country.

Wheeling in a 24-foot Ryder truck filled to the brim, Christopher Billie and Obadiah Osceola, of Hollywood, braved chilly winter temperatures and a little snowfall to transport clothing, shoes, blankets and toys to five communities on two reservations “out West” where money is scarce and need is great.

“We are so fortunate to have what we have. It’s compassion and caring; that’s what we do as Natives, from one Native to another,” Billie said.

The driving duo left Dec. 12 from Hollywood Reservation for the 2,150-mile trek to Rapid City, South Dakota where they met Seminole Tribal member Bobbie “BJ” Billie, who lives in the area while attending Oglala Lakota College about 80 miles southeast.

On Dec. 14, the group began dropping off goods in Red Scaffold then moved on to Dupree and Cherry Creek, all communities on the Cheyenne River Sioux Reservation in South Dakota. The humanitarian effort ended in Red Shirt in the Pine Ridge District further north. BJ Billie said Christopher Billie and Osceola were assisted on the journey by two of her close friends, Josh Washington and Marcus Swallow, of the Oglala Sioux Tribe.

The goods were donated in recent weeks to the Native Relief Foundation, a charity organization created by Seminole Tribe members to help alleviate desperate poverty in some of the most remote and tiniest communities.

Gloria Wilson, the organization’s spokeswoman, said a handful of friends were provoked into humanitarian action in 2011 after seeing a television news report about the destitution suffered by the residents of Pine Ridge, South Dakota.

“We were watching at home, not knowing the others were watching, too, and then we called each other saying, ‘Did you see that, did you see it?’ We decided we had to do something about it,” Wilson said.

Fifteen friends put their heads together for the first collection drive. Wilson said the giving grows every year. In the past, most of the effort went to Pine Ridge. This year, information filtered through the group that many smaller and more secluded communities are hard hit but hardly noticed.

Wilson said other organizations, such as the Native American Heritage Association (NAHA) and Running Strong for American Indian Youth, also reach out to the Native needy. NAHA, this year alone through November, had provided 3 million pounds of food and 161,000 pounds of clothing and blankets to South Dakota reservations.

But, Wilson said, much of the goods can only be provided to people who make it to distribution sites. On reservations so vast and residents too poor to afford transportation, hundreds of families are left out.

“We want to go right into the communities and help the very people,” Wilson said. “We try to touch the places the other charities do not reach. We help fill the gap.”

Wilson said stories that come out of the reservations are heartbreaking. Last year, a mother of eight was suddenly left destitute when her husband, the only family member who held a job at the time, was struck by a train on the way to work. This fall, a family of six was left homeless when their house burned to the ground in a blaze.

“It’s frightening what people will do to feed their families and keep their homes warm,” Wilson said.

Rhonda Bain, a member of the Rez Dawgz Motorcycle Club who turned out to sort and box the donations, said she saw the pain of the people firsthand – but by accident – while on a motorcycle run to Sturgis, South Dakota.

“When I first saw the poverty, I had immediate empathy. You hear about it, but when you actually see it, it’s like wow. It makes you want to do more,” Bain said. “It’s such beautiful land out there, but stagnant economy.”

According to the Department of the Interior’s 2013 American Indian Population and Labor Force Report, the highest estimated rate of poverty is in South Dakota, with 43 to 47 percent of Native American families in 2010 earning incomes below the poverty line.

In Eagle Butte, the median annual income is $21,000. The unemployment rate is 34 percent, according to 2010 census data.

The fourth annual Seminole effort wrapped up a week later than expected, which prompted phone calls from people in the Dakotas who worried that help would not arrive from Florida as in previous years. BJ Billie tapped connections throughout the area to ensure the grassroots project would go directly to the people who need the most assistance.

“It’s good to hear that people look forward to what we bring to their communities. I only wish we could do more, but we seem to improve our numbers every year so that helps,” Wilson said.

Christmastime had little to do with timing the drive out to the Great Plains, Osceola said, but because people are more inclined to help during the holiday season, it made perfect sense. For Osceola, the trip was personal.

“I’ve never been out there, but I’ve wanted to go for so long that it is about time. I really want to meet the Lakota people,” Osceola said.

Other organizers included Charlotte Burgess, who led the Brighton and Tampa collection; Alice Billie and Esther Gopher, who headed the Big Cypress, Immokalee and Naples effort; and Jennifer Osceola and Wanda Bowers, who manned Hollywood.

About 20 Tribe members and friends lent time and patience to sort through pickup trucks and trailers loaded bags and boxes that overflowed with clothes, bedding and toys. Charlie Tiger brought his afternoon work crew from the Tribe’s We Can Recover program.

In March, the group will host its annual spring yard sale fundraiser to support transportation costs and to help purchase extras as needs arise. Last year, the group was assisted by Tribal leaders to purchase coats for 147 children at Wounded Knee District School – pink for girls and yellow and blue for boys.

“This is how the universe works. If it is open to give, it is open to receive,” Bain said. “We’re looking out for our Native people.”