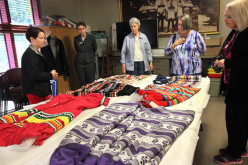 BIG CYPRESS — The exhibit “It’s Not a Costume – Modern Seminole Patchwork” at the Ah-Tah-Thi-Ki Museum opened to a generous crowd Dec. 13, proving that ordinary things for one group of people can be quite exotic to others.

“Every piece made is absolutely gorgeous,” said Mary Ann Boucher, a snowbird and quilter who winters at the Big Cypress RV Resort.

Mesmerized by the artistry of nearly 30 long shirts, skirts, vests and jackets that make up the year-long show, Boucher asked myriad questions during the afternoon reception and then toured the Museum’s private vault where some of the oldest, most-treasured and delicate patchwork clothing is stored for posterity.

For Tribal members, the exhibit showcases the history and evolution of clothing worn on any given day – even before clothing contests.

Ruffles and capes for simply designed dresses and skirts harkened to the 1920s and ’30s, before symbols like man on horse and fire were incorporated. The ’40s and ’50s look was influenced by strips of rickrack. It has only been in recent history that women infused pop culture icons into designs. Florida State University and Miami Heat logos, and even the faces of SpongeBob SquarePants, have found a comfortable home in the Seminole patchwork scene.

“Patchwork is part of the everyday wardrobe distinctive to Seminole culture,” said Rebecca Fell, who co-curated the show with Seminole artist Jessica Osceola.

Most of the exhibit features the modern cuts and silhouettes of the attire. Though not considered vogue to the worldwide fashion scene, the combinations of fabrics and cuts absolutely reflect the maker, Fell said. Sometimes the story behind a piece is deeply personal and shared only with whomever the seamstress desires – or no one at all.

Other items are more functional: a skirt to wear to the office, a shirt for the rodeo, a longer skirt for cooking at the chickee.

For decades, men did not wear slacks. The progression of men’s patchwork long shirts from pre-Constitution, knee-length to tuckable hip-lengths occurred with the integration of European men’s wear. Somewhere between long shirts and pants, patchwork below the belt line was discarded.

Osceola said printed fabrics are a very modern nuance to patchwork. Though she generally objects to the use of pop-culture in patchwork, she concedes that the fashion is acceptable because it reflects the personal interest of the creator and wearer.

Osceola, an eclectic artist whose works were featured at the 2011 and 2012 Art Basel in Miami Beach, is also a Master of Fine Arts candidate at the Academy of Art University and a valuable consultant and contributor at the Museum.

“Style is always changing and moving, even in subtle ways,” Osceola said.

She noted changes in tailoring over past decades. Poufy skirts and ruffled shoulders can indicate trends that have come, gone and came back. Shorter, wider shirts are trending now for girls and younger women, but Osceola prefers more fitted forms.

But one thing that has never changed with patchwork: “It is a very social thing,” Osceola said.

Women often gather in groups to sew. Conversations spark during the creation of the garment. News is shared. Opinions are heard.

Conversation bubbles that appear on walls throughout the exhibit reflect how patchwork is a part of daily life. One bubble reads: “Don’t forget to wear your long skirt. You are cooking by the fire today!” The response: “Yes, mom.”

Osceola is protective of the cultural treasure that patchwork is to the Tribe. Though she is not concerned that non-Native people may admire Seminole-made patchwork enough to wear it, she cringes thinking about non-Tribal manufacturers attempting to recreate it.

That sentiment is not lost on crafters and quilters like Boucher.

“The question of whether it is ethical for someone else to make patchwork is 100 percent reasonable,” Boucher said. “I concluded that it was OK for me to try it once because anyone would know it’s not real. I am not and never will be that good.”