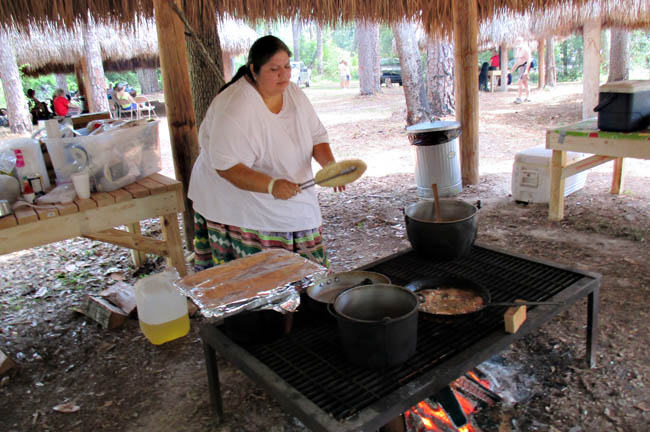 WHITE SPRINGS — Temperatures in the 90s and a couple driving thunderstorms did not dampen the fun and music at the 62nd Florida Folk Festival,  held annually on Memorial Day weekend at the Stephen Foster Folk Culture Center State Park on the Suwannee River.

The most comfortable folks at the three-day festival were likely the Seminole Indians who traveled from South Florida to the little park near the Georgia line. They  demonstrated Tribal arts and crafts and traditional cooking in their new Seminole village.

“Well, it’s always cooler under the chickee,” said Lorene Gopher, director of cultural programs for the Brighton Culture Department. The overhanging thatch and roof seemed to bring the scorching heat down several degrees. “And they haven’t been leaking, so far.”

Chairman James E. Billie and his crew finished the village, dubbed Ee-to-lit-kee, during a year of periodical visits to the park, which is named after the great composer and America’s first pop star, Stephen Foster.

“I can’t tell you how much this new village means to me and the state of Florida,” said Donald Forgione, director of the Florida Park Service. “It’s just another example of the excellent relationship we have had with the Seminoles since the very beginning of this park.”

The new village is the second Chairman Billie and his crew built at the park. The first was constructed in the mid-1980s at the far south end, which curves along with the river.

“I felt like we were outside the gates of the festival,” Chairman Billie said. “I felt we should be inside where we could feel more of a part of the festival, if you know what I mean.”

Ee-to-lit-kee includes a cook chickee, where Charlotte Burgess, Willo James and Mollie Jolly kept a fire burning and provided samples of frybread and sofkee to visitors; a long “canoe chickee,” where a great log will be fashioned into a canoe; and a large stage chickee, where dozens of acoustic musical acts performed nonstop during the festival.

The Ah-Tah-Thi-Ki Museum sponsored an information table that was manned by Van Samuels, community outreach specialist, and featured co-worker Reinaldo Becerra and his red-tailed hawk.

“Next year, I hope they will let us demonstrate alligator wrestling,” said Becerra while balancing the menacing hawk on his hand. “If we have four or five shows a day, we will really pack this place.”