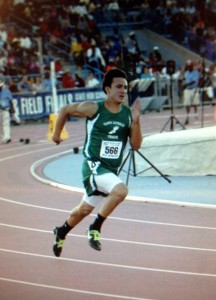 TAMPA — Tribal youth Justin Motlow, 16, of Tampa Catholic High School, has made treads in track, competing with the top runners in the Class 2A Division.

Only two years into running track, he has a determination that has brought him contending with the best. Although running wasn’t his preferred sport in the beginning, he strived hard and raced well.

“I decided to run track after my first year of football,” he said. “My teammates and coaches suggested that for conditioning and to stay in shape.”

Motlow began his journey by qualifying for the Florida High School Athletic Association (FHSAA) 2A District 9 Championships, which were held on April 12 at Berkeley Preparatory School in Tampa.

“My favorite race is the 4×100 because I enjoy the speed and seeing all the relay teams,” he said.
With his personal best time of 50.13 in the 400-meter dash at Districts – an improvement from his previous year’s time of 51.83 – it was more than enough to advance him to the next level.

Just a week later, on April 19, he participated in the FHSAA Class 2A Region 3 Championship, a State qualifier. Again, Motlow and his teammates did an outstanding job, placing in the top four in the 400-meter dash and the 4×100 relay.

To end the season, Motlow’s final stop was the FHSAA State Championship, where he had the opportunity to compete with the best of the best. Overall, he finished in a respectable 11th place in the 400-meter dash.

Not only does he work hard on the track, but he also strives hard in the classroom. With all the grueling practices and competitions, he still manages to maintain an “A” average.

“Always work hard at whatever you want to do,” he said. “Don’t ever let anybody tell you that you can’t do it, and always, school work comes first.”

Motlow’s future plans for running track are still open for now, but he hopes to one day attend Florida State University.

When asked how he felt about representing his Tribe, he said, “Very proud to be representing for my Tribe and school.”