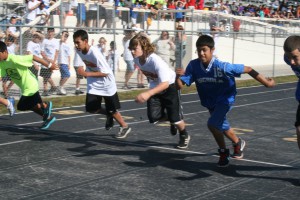 OKEECHOBEE — School spirit and pride prevailed on April 27 as students from Pemayetv Emahakv Charter School cheered on their fellow classmates at the HERSHEY’S Track & Field Games.

Charter School students loaded the bus in the early morning and headed to Okeechobee in hopes of snagging one of the top two places in their respective track or field events in order to advance to the State finals.

“A lot of the elementary and middle schools have come together for the past few years to compete in the track meet,” said Darryl Allen, Charter School resource officer and Lady Seminoles softball coach. “We are just excited to be here amongst everybody else.”

In the month and a half leading up to the HERSHEY’S Games, students worked to improve their running times and to further their throwing or jumping distances.

“I like to exercise a lot,” sixth-grade student Sunni Bearden said. “I would run every day on the treadmill. I would run a mile so it would increase my speed and make me stronger.”

Fifth-grade student Alicia Fudge, who competed in the 200-meter dash and softball throw, also practiced to improve her chances of advancing to the State finals. 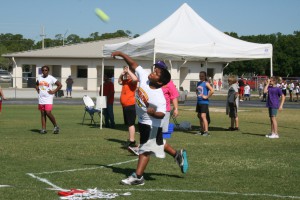 “Me and my dad would go out to our basketball court and do suicides (a running exercise),” she said. “And I would throw with my brothers.”

For Bearden and Fudge, their hard work paid off, as both girls placed and will compete at the State finals on June 16 in Altamonte Springs, Fla. Bearden placed first in all three of her events: the 100-meter dash, softball throw and 4×100-meter relay. Fudge placed second behind Bearden in the softball throw.

“We have a lot of athletes at our school, so anytime we compete we are going to be right in the middle of the hunt with everybody else,” Officer Allen said. “Just as with anything else, I hope that they take the mentality that no matter what we do, we compete to win. So far, so good.” 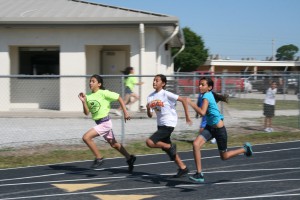 “We know there is life outside of the reservation, for as beautiful as our neighborhood is on the reservation and in our school and everything else, outside communication is extremely important,” Officer Allen said. “And for us to be able to compete, we want the world to understand what this hidden diamond is, which is Pemayetv Emahakv, and the children and our staff that work there. So every chance we get to come out and show that hidden diamond, we want to take it.”