For 90 years, the Tamiami Trail has served as a shortcut route for Floridians and visitors from around the world to get from one coast to another in South Florida. To celebrate its significance to the area, ECity Publishing, an independent publishing company in Everglades City, decided to republish acclaimed local author Maria Stone’s book, “The Tamiami Trail: A Collection of Stories.” 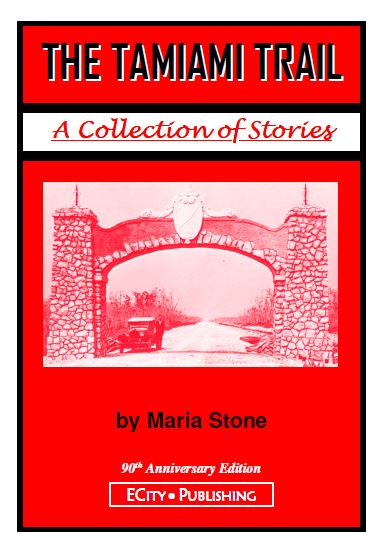 The book, originally published in 1998 for the 70th anniversary of the Tamiami Trail, is a series of recorded interviews with people who have lived and worked along the trail since the 1920s. There were only 100 spiral-bound copies of the original book, as they were all created with a typewriter and based off recorded interviews on cassette tapes. Ecity’s Publisher Marya Repko decided to reprint the book with some additional material, including a timeline, maps and photos.

Repko explained that prior to Stone’s death in 2009, Stone, a former Immokalee teacher, gave her research to her friend Lila Zuck, a Naples historian. When Zuck moved locations, she decided to donate the information to ECity Publishing. With dozens of files, transcriptions and cassette tapes in tow, Repko found that the book’s unique perspective on South Florida life and history would be the perfect way to commemorate the trail that has served millions for nearly a century.

“This is unique because it’s peoples’ stories. It’s first-hand experience,” Repko said. “It’s not a history book or a textbook … as a historian, I think it’s interesting because you get a picture of [that time].”

One of those unique stories goes back to before the Tamiami Trail was paved and had just opened in 1928. Because the new trail went through acres of wildlife, people often came face-to-face with wildlife and got into serious accidents.

“People would get flat tires or hit alligators or have other incidents, so there were these six stations [along the trail]. A man would go out on his motorbike and drive five miles to the east and then turn around and go five miles left to look for people who were in trouble. He carried a gun, but it wasn’t because he was a police officer or looking for criminals; he was looking for alligators or other animals that might be dangerous,” she explained. “Because the road was higher than the rest of the swamp around it, during the rainy season the animals would come up on the road and he’d try to scare them away so the cars wouldn’t hit them.”

The man who patrolled this area was the owner of Monroe Station, one of the six waystations along the trail, located in Big Cypress National Preserve. Collier County founder Barron Collier established the stations to help motorists safely get across the trail. Each station, run by a husband and wife, offered fuel, food and car services. The husbands were responsible for patrolling five miles on either side of their stations while the wives upheld the station’s services.

Sharing service in the areas were Seminole and Miccosukee tribal members, who Repko explained regularly worked with the families at Monroe Station. Tribal members would often set up souvenir shops and other stores and businesses adjacent to the stations to meet visitors and become friends with service station owners. Accounts of these interactions are depicted in interviews with Seminole Tribal members within the book as well.

Upon republishing the book, Repko printed only 25 copies, all of which sold out almost immediately. The success persuaded her to order more copies, which are now available for purchase at $10 each at ecity-publishing.com.

Though nobody interviewed in the book is alive today, Repko said that their stories will live on forever.

“Maria Stone did a huge favor to the whole area by recording these stories,” Repko said. This road opened up South Florida. … Life is better because we have the road and because we can get from A to B. Even though things have changed a lot in 90 years, I think the quality of life is probably better for everybody.”