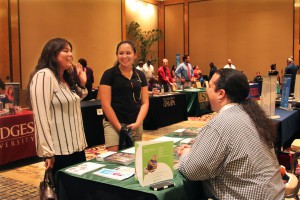 HOLLYWOOD — Finding the right college can be a long and difficult journey for students, but the Education Department is making the road a little smoother through its many resources, including the Higher Education College Fair held Oct. 4.

The Education Department brought 70 post-secondary institutions to Hard Rock Hotel & Casino Hollywood, so Tribal students could see the broad spectrum of education available to them. Schools included everything from medical schools to flight schools and large universities to small liberal arts colleges – and even the Ivy League.

Nearly 140 parents and students attended the fair, with students across all reservations accounting for 115.

Although admissions officers had much to say about the unique characteristics of their own schools, they all agreed on one thing: Choose the school that fits you best.

“The ability to know yourself is very critical in the process – your personality, your ability, your strengths, your limitations,” said Shruti Elliot, Higher Education recruiter for the Seminole Tribe.

Other recruiters talked about the numerous factors that go into the decision process.

“I encourage them to come in with a general idea of what they want to study and what environment suits you best,” said Paul Shultz, from University of South Florida.

For the first time in the fair’s eight-year history, Tribal students currently pursuing their education were invited to attend the fair as their school’s ambassador. This provided prospective students an opportunity to gather information from their peers.

Nicole Osceola, an ambassador from Cosmix School of Makeup Artistry in Fort Lauderdale, provided a visual display of her education by offering makeovers for fair attendees. She especially loves body painting and dreams of becoming a professional stage makeup artist on Broadway.

“There’s a million makeup artists in New York, so I thought why not try something different?” Osceola said.

Osceola speaks highly of Cosmix, noting that she has learned more in three months than most people do in years. She said Tribal members contemplating going back to school should just do it.

“The more you think about it, the more you procrastinate, the more you’re going to doubt yourself,” she said.
Another cosmetic school ambassador, Cooper Rivers, from Paul Mitchell the School Miami, agreed with Osceola.

“Just do it. (You) can’t live off dividends. You want something to be proud of, to tell your kids about,” she said.

Rivers lives in Big Cypress, more than an hour away from school, but she shows up every day because of the exciting environment she works in. Her specialty is hair, evident from her shiny blue locks, and she aspires to be just like her role model, Joel Warren, a world famous master colorist.

Also during the fair, the Tribe’s Human Resources Department brought a basketball hoop for attendees to “shoot for a degree.” Each attendee got four shots, representing different levels of education. Regardless of whether they made the shot, they were entered into a raffle to win the basketball hoop to show that all they have to do is try.

The fair offered something for everyone, and recruiters assured students of the great value and need for people in their respective fields.

“Health careers are the way to go,” said Clyde Ramsumair, of Sanford-Brown Allied Health. “There will always be sick people and we need great people to take care of them.”

“There is a critical shortage of airline pilots,” said Michael Punziano, of the ATA Flight School. “It’s a fabulous career for anyone.”

Of the 63 feedback evaluations submitted – the most submitted in the fair’s history – 27 students said they want to attend an in-state institution, while 24 students said they would rather go out of state; nine students were unsure. Although attending school far from home seems scary, colleges offer many extracurricular activities and organizations to help students find a niche.

Some schools offer Native American studies programs, organizations and clubs to help Tribal members stay rooted in their culture and make new friends in a space of familiarity. This year, Dartmouth College celebrates 43 years of its Native American Program, which provides academic advising, personal counseling and opportunities for students to explore and express their culture. School president John Kemeny established the program in 1970 to change the lack of higher education opportunities for Native Americans.

Since the program’s inception, nearly 700 Native Americans from more than 200 Tribes have attended Dartmouth. Currently, 200 Native students attend Dartmouth, representing 60 different Tribes – one of those being Joseph John, of Hollywood.

John’s sister Carson Knaby attended the fair but has different prospects in her future; she wants to study culinary arts at Johnson and Wales University.

“There is a school out there for somebody and one school does not fit all,” Elliot said.

The Education Department will follow up with the students who attended the fair to discuss interests and options and move forward with planning a college tour.

“It can be very intimidating so we want to make it as simple as possible,” Elliot said.