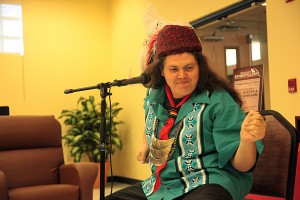 Seminoles tell stories as a way of passing information, legends and morals down through generations. In keeping with the tradition, preschoolers were invited to a Seminole Storytellers program at the Hollywood Senior Center on March 21.

During the intergenerational storytelling, sponsored by the Ah-Tah-Thi-Ki Museum, the group of 3- and 4-year-old children sat on a rug and listened to Gordon “Ollie” Wareham and Paul Buster share their fables. Despite their best efforts to listen, the preschoolers were easily distracted. The young crowd was more of a squirming, wriggling mass of cuteness, but it didn’t stop either storyteller from reaching the moral of their tales.

Wareham began the event by playing songs on a Native American flute. As the children settled into their seats, he told the legend of the Rabbit and the Box Turtle.

“We have some bad people in these stories to teach you kids how not to act,” Wareham said. “We are Seminoles, and that is more than our DNA. It’s about the knowledge we have and the stories told by our grandparents and parents.”

Master of ceremonies Van Samuels introduced the storytellers and engaged the preschoolers.

“When I was your age, these stories were told to me,” said Samuels, Ah-Tah-Thi-Ki Community Outreach specialist. “If you listen closely you might hear about an animal you know.”

With that, Buster took his seat at the front of the room and began speaking in Elapoonke, or Mikasuki, to the children.

“Make an effort to be a good Seminole and learn your language,” said Buster, cultural language instructor in the Hollywood Culture Department.

He went on to tell a story about procrastination. The person in the story saw some berries when they were green and too hard to eat. Then he saw them when they were ripe but didn’t go out to gather any. By the time he went out to get the berries, they were shriveled and no good. The lesson: Avoid putting tasks off and do them when the time, and the berries, are ripe.

“Telling the story in English takes about 50 percent out of it,” said Buster, who would have preferred to tell it in Elapoonke. “Listen to your teachers, moms and dads and you will do well.”

Buster sang a song for the children, in English and Elapoonke.

“We want to get the seniors to interact with the children,” said Melissa May, Ah-Tah-Thi-Ki Programs manager. “We hope as the program grows, other seniors will feel comfortable enough to share their stories.”

The Seminole Storytellers program will be held on May 23 in Big Cypress.

Traditional legends can be passed down anytime and anyplace said Billy Walker, of the Big Cypress Reservation, who entertained about a dozen children with stories April 2 at the Willie Frank Memorial Library.

“A long time ago we’d sit by the fire and hear the stories. Listening to the legends was our television,” he said.

Walker, a storytelling alligator wrestler and wildlife guide, shared tales that teach respect for humanity and nature. He also recanted a legend of how several central Florida bodies of water, including Lake Okeechobee, came into existence – thanks to two hunters and a snake.

Walker knows nearly 40 legends that have been passed down through generations by word of mouth. For some people, Walker said, it can take a lifetime to “get” the message.