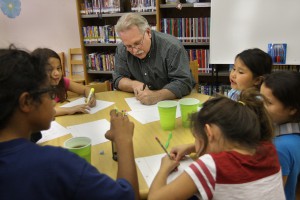 BRIGHTON — Every time Michael James writes, he answers an expectation.

“We sparked a friendship then started writing letters, and in every letter Patrick would tell me to keep writing,” James said.

When James left South Florida at age 37 to study nursing at University of North Carolina at Chapel Hill, Smith did not let up.

“He sent another letter that said, ‘I hope you’re writing,’” James said.

James, now 52, is the son of an Okeechobee dentist who in the 1960s served the Tribe. James said he practically grew up on Big Cypress Reservation, where he forged many friendships. After establishing two photography studios and a career that took him coast to coast, his photography became nearly exclusive to the Tribe and he began to write in 1995.

Last year, the photographer/reporter turned nurse, who now works as a kidney transplant coordinator at University of North Carolina Hospital, obliged Smith by publishing three books and a short story all influenced by his experiences with the Tribe.

One of the novels helped fulfill another promise.

“Billy’s Camp” was culled from days he hunted wild turkey and boar with an old buddy who had a camp in Big Cypress during the 1990s, before the hunting grounds became an animal refuge. His friend died in 1999.

“The last conversation we had, Billy told me to write about our times,” James said.

The book and James’ other missives – “Bone Diggers,” “Turning Final” and “Pirate’s Ghost” – were on display April 3 at the Billy Osceola Memorial Library on the Brighton Reservation, where James led an after-school book writing workshop for eight children, all students at Pemayetv Emahakv Charter School.

“I want the children to know that it’s important to write,” James said. “That’s how we know about people 50 or 100 or so years ago. It’s because someone wrote it down.”

The workshop began with a challenge: “Why don’t we write a book just for the fun of it?” he asked.

“Even though I live 700 miles away, we will write this book together,” he said.

The children bubbled with ideas.

They brainstormed the necessary parts of a story and what they would want to read or write. The decision? They would write about playing hide-and-seek after school on the reservation – and the title would be “Funny Book.”

James and the children will finish the book in coming months via the Internet, phone and letters with help from Deborah Johns, site supervisor for the library.

“It’s my first time to ever write a book. It will have a horse, a pig and they will all play together. It will be magical,” said Ashlynn Collins, 7.

“I just can’t wait to tell friends that I am an author,” said Talena Holata, also 7.

Johns said it was coincidence that the event happened.

One day she was surfing the Internet looking for books relating to Native American topics and recognized James’ name from his days as a Seminole Tribune reporter. Four days later, James called “out of the blue” to ask if he could host the kid’s workshop.

“It’s great to have Michael back here. He promotes reading and shows the children that writing is something they can do – they can put their thoughts on paper,” Johns said. “Now, when the children pick up a book to read, they will know what the author did to make the book happen.”