When Stephanie Bowers Hiatt was a sophomore in high school back in the early 1990s, she met a boy at a summer church camp in North Dakota.

A couple years later that boy convinced her to join him in attending the University of Sioux Falls in South Dakota. Although her roots were firmly established in Florida – born on the Hollywood Reservation and growing up in Bradenton, where she excelled in volleyball – Bowers Hiatt decided to head to the upper Midwest.

“My friends and family thought I was crazy to go to Sioux Falls,” she recalled. 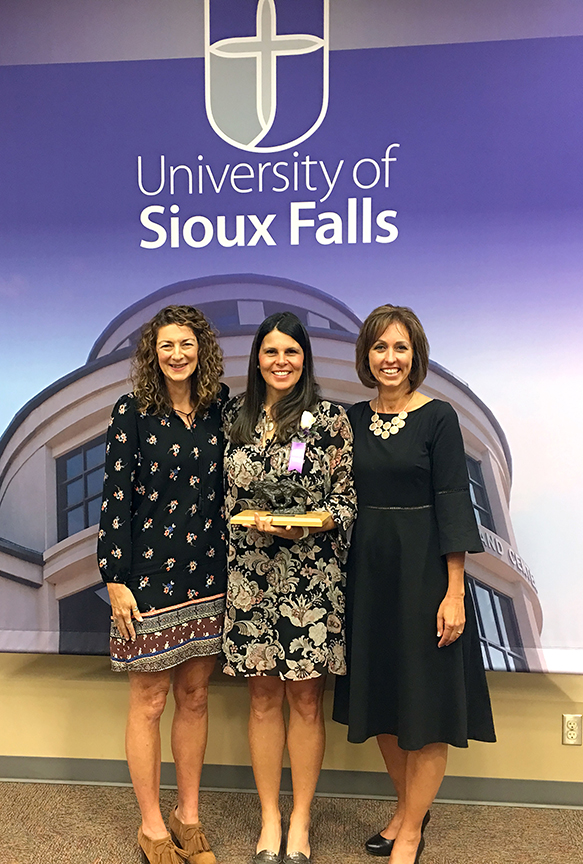 More than 20 years later, Bowers Hiatt has no regrets about following that boy and picking USF.

“It was one of the best decisions I ever made,” she said.

Bowers Hiatt majored in elementary education and graduated in 1997 after compiling such an impressive resume as a standout on the women’s volleyball team that her play on the court earned her a place in the USF Athletics Hall of Fame. She was among six individuals inducted as members of the Hall’s Class of 2017 during a ceremony Sept. 22 at the McDonald’s Center on the USF campus.

“It’s an honor to be inducted into the Athletics Hall of Fame and be included with names I know and people I respect and admire,” Bowers Hiatt, 42, said in a phone interview the day before the induction.

Her love for volleyball emerged from playing with friends on the beaches in Bradenton.

“I think it started because all my friends were doing it. I didn’t come from an athletic family,” she said.

As Bowers Hiatt continued to get better, accolades followed her as she enjoyed a successful four-year career on the volleyball court at Bradenton Christian, where she earned All-State honors and was named Player of the Year by the Bradenton Herald.

Ironically, one of the most memorable games for the woman from Bradenton occurred while USF was playing in a tournament in Florida. Before a match against Palm Beach Atlantic, Stephanie said she overhead an official refer to USF as “a Podunk team from South Dakota.” Bowers Hiatt relayed that comment to her teammates and the spark was lit for a USF victory.

“We played one of our best games. It was probably one of the best defensive performances of my career,” she said.

So whatever happened to that boy from summer camp?

Stephanie and Jon Hiatt have been married for 20 years and live in Sioux Falls. They have three sons: Tyler, Caleb and Lucas. All play sports. Tyler, the oldest, is the starting center on the Lincoln High School varsity football team. He had a game on the same night of the induction, but the rest of the family attended the ceremony, including Bowers Hiatt’s mother Debbi Johnson and her husband Rick, and Bowers Hiatt’s father Stephen Bowers and his wife Elizabeth. Stephen is the Seminole tribal liaison for the Florida Governor’s Council on Indian Affairs and Veteran Affairs.
Although she lived on the Hollywood Reservation for only the first six months of her life, Bowers Hiatt has fond memories of coming back to the rez as a youngster, including volunteering at Tribal fairs and working with her aunt Wanda Bowers.

A former English language arts teacher, Bowers Hiatt is pursuing a doctorate in education from Hamline University in Minnesota. She said it’s an opportunity made possible from assistance provided by the Seminole Tribe.

“I’m so thankful for the opportunities the Tribe provides for its members. It wouldn’t have been possible if I wasn’t a member of the Tribe,” she said.