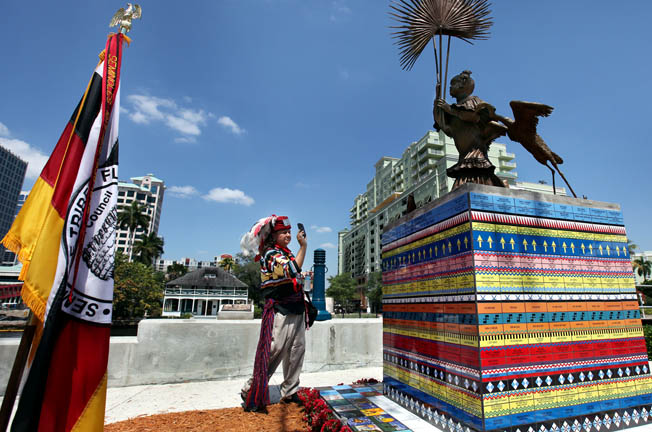 FORT LAUDERDALE — The long-awaited arrival of a bronze sculpture that commemorates the timeless Native presence along New River in Fort Lauderdale occurred March 20 amid fanfare and speeches.

“Fort Lauderdale is a city about building community. Having the sculpture here among so much history is symbolic and meaningful. Let the circle be unbroken,” said Fort Lauderdale Vice Mayor Romney Rogers.

More than 150 people packed the tiny city-owned plot directly across the waterway from the historic Stranahan House, home of city pioneers Frank and Ivy Stranahan. Many, including non-Natives, wore patchwork dresses, jackets and vests in respect to the Seminole Tribe, whose forefathers in the late 1800s and early 1900s traded alligator hides and bird plumes with Frank Stranahan in exchange for sugar, flower, beads and other commodities of the day.

“I am so proud to be a part of the blood, sweat and tears that went into bringing the sculpture here today, and I am proud to be a Seminole, Floridian and a Fort Lauderdale resident,” Osceola said.

He noted the sculpture’s pedestal: 500 Seminole patchwork tiles – 100 purchased by project sponsors, including the Seminole Tribe, and 400 donated by philanthropist AJ Acker and then named for people who help support the life and spirit of the region, including many Tribal members. Hugging the base are 76 tiles hand painted by Ahfachkee School students to portray everyday reservation scenes that include native birds, fish, turtles, chickees, horses and peaceful vistas.

“It gets me right here,” said Osceola tearfully, with his hand over his heart.

Other Tribe attendees included Gordon “Ollie” Wareham, who played a Native flute; MaryJene Koenes, who offered a prayer and song in Mikasuki; and Koenes’ grandsons Nicholus and Lane, who led the Pledge of Allegiance twice – in English and Mikasuki.

Titled “Florida” A Seminole Girl by international sculptor Nilda Comas, the bronze is a life-size rendering of a 5-year-old dressed in traditional attire circa 1910 happily prancing at play with palm fronds in her hands and Everglades wildlife at her feet.

The city of Fort Lauderdale donated the space at Stranahan Landing along the New River where Seminoles would bank canoes and then shuttle across to the Stranahan homestead. There, they would often camp for several days while the men traded goods, and Ivy Stranahan, a former teacher, taught children to read and write.

But historian Patsy West, who wore a long Seminole skirt while providing a narrative of the location, said Native presence dates much further back to when the tributary provided a natural water route to the Everglades.

“Long before, the Tequesta gathered clams and oysters and hunted manatee here,” she said.

The area was also home to the great warrior Sam Jones, who as early as 1828 used the route to course toward Pine Island and Long Key – the highest land masses in the area where Natives camped through the Seminole Wars.

Minutes before climbing a ladder to release strings that tied a massive cloth around the statue, Comas told the crowd that she began her quest to create the Seminole piece about four years ago when she was moved by the state’s 500th anniversary events. Her research of the first Floridians opened doors at Ah-Tah-Thi-Ki Museum where she learned much about Seminole life in the 1900s – what clothes were worn, what animals roamed the area and that palm fronds were collected and then used to thatch roofs on chickees.

Soon, she met Jimmy Cypress who knocked on her studio door one day seeking an art teacher. Months later she met Elgin Jumper who also became her student.

The rest is history, Comas said.

“We all became great friends … now I want you all to love the Seminole Girl,” Comas told the crowd just before the unveiling.