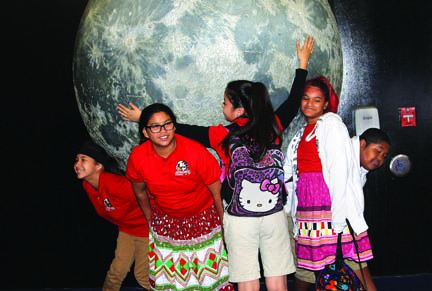 DAVIE — It’s not every day that a school field trip goes to the moon, Mars and beyond, but a voyage to Buehler Planetarium & Observatory in Davie provided a galactic experience for five Ahfachkee School fifth-graders.

Inside the planetarium that seats up to 100, the small contingent had plenty of space to learn about space during a private presentation on the campus of Broward College. Along with teacher Alicia Murray, the students plunged into darkness Feb. 26 as they spent an hour gazing upward at two presentations on a domed ceiling.

“Infinity Express,” a 23-minute film made for the Smithsonian’s National Air and Space Museum, provided images and history about the solar system and galaxies. From Mars’ massive canyon region known as Valles Marineris to the liquid ice in Jupiter’s Europa moon to photos of a supernova captured by the Hubble Space Telescope, the film served up a celestial buffet for eyes to feast upon.

“It was great. I learned a lot of stuff. I didn’t know there was that much stars and galaxies,” said student Edie Robbins.

Inquiries into the beginning of the world, existence of other life forms and the end of the universe were posed by the film. For the students, the end – of their visit – came when Buehler technician Travis Wright concluded his presentation by providing guidance and tips for locating planets and stars in the nighttime sky.

“I liked it a lot. I liked learning about the different kind of galaxies and the ‘Infinity Express,’” said student Ramona Jimmie.

All the students said they would like to return to the planetarium for additional programs. The planetarium and its next-door neighbor observatory offer presentations, lectures and shows that are open to the public. For more information, visit www.ILovePlanets.com.