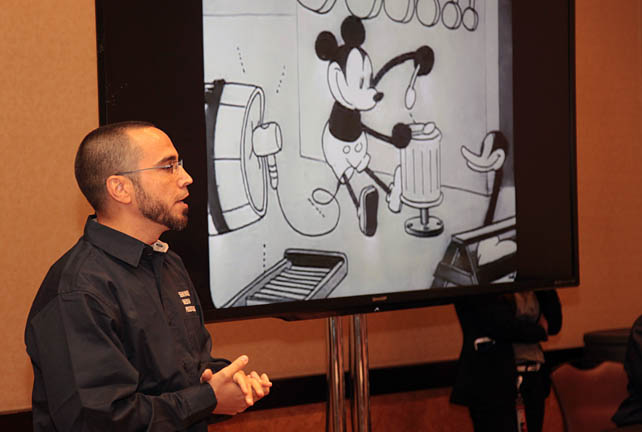 HOLLYWOOD — Dozens of kids gained an inside view of the media industry and cutting-edge technology during the Seminole Media Productions Workshop Sept. 5.

The eighth annual event was held in conjunction with the Education Department’s Education Expo to give youth interested in pursuing careers in media a taste of the industry.

“We thought it was a success,” said Sasha Cancel, SMP production specialist. “Students were intrigued by what we presented and a few came up to us afterward to ask how they can learn more.”

During the workshop, senior editor John Voth and videographer Fred Mullins took the students through the history of animation from the mid-1800s zoetrope to today’s motion capture technology.

The cartoon demonstrates how modern-day technology can help pass down the traditions of the Tribe, and attendees learned how the cartoon was created.

Attendees were also introduced to the iClone software, which uses state-of-the-art motion capture technology to create animations. They stood in front of a motion sensor and watched as their motions were mimicked by a digital avatar on a projection screen.

“The SMP workshop was the most interesting,” said Darren Cypress, 15, an Ahfachkee School ninth-grader who wants to be a director. “I’m trying to get into photography. It amazes me how you can capture things on a little memory card.”

Another goal of the workshop was to share information on video production and what it takes to produce a professional-quality video. The SMP crew introduced its newly launched website Native Driven Network (NDN), which produces documentaries and covers local, national and international stories. The process was described in detail, starting from story ideas to interviews, editing, music, graphics and voice-overs.

The SMP crew recently traveled to California to interview Saginaw Grant for a documentary titled “The Legacy of Saginaw Grant,” which is on YouTube.

“It’s getting a lot of buzz,” Diaz said. “We are entering it in the American Indian Film Festival in California.”

Students learned that jobs in video production include positions on both sides of the camera as videographers, on-air hosts and anchors. SMP’s Communications and Business Marketing Departments shared information with attendees interested in reporting, photography and graphic design.

“You get in-depth information and tell stories,” said Ishma Fray, SMP audio specialist. “You learn a lot. These stories matter, and it’s a great thing knowing something is out there that you helped create.”