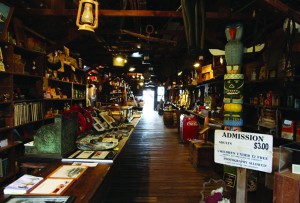 CHOKOLOSKEE — One thing that Lynn Smallwood-McMillin can’t get out of her mind is the unfairness of it all.

“If a Circuit Court Judge ordered you or I or just about anybody on the street to do something and we openly defied the order, why, we would go right to jail and pay a big fine. Right?” she said.

“That’s why I don’t understand why these guys are given such special treatment. They aren’t even from around here.”

The frustration, which has been building up ever since her world literally exploded last April 14, is taking its toll on McMillin.
“We supposedly won our case,” McMillin said. “But I sure don’t feel like a winner.”

McMillin is the executive director of the small trust that owns the historic Smallwood Store at the southern tip of an island, nestled in brackish waters of the Ten Thousand Islands of Southwest Florida. Last April, without warning or even notice to the town or its neighbors, a development outfit from Highlands County called Florida Georgia Grove LLC (FGG) snuck into town and literally removed 900 feet of Mamie Street, wiping out the only access to the famous Store.

Outrage from townsfolk, state museum officials and county commissioners led to numerous hearings, the recusing of two judges and a pair of full-fledged hearings in which two judges have ordered FGG to put the road back.

In the meantime, the Store has barely remained open because the only access is a jagged, pothole-littered, limerock path suitable for four-wheel drives. A popular school field trip destination and an international tourist stop, the Store is in disrepair – money saved to make structural repairs has gone to pay legal costs.

“It sounds pretty straightforward to me. Put the road back where it was and pave it. Or go to jail and pay daily fines until the order is complied with,” said Collier County Commissioner Jim Coletta, who has been the government’s point man for this issue.

Coletta has notified FGG, in person and in the media, that the County Commission will not provide any variances or rezonings or work with FGG in any way to develop the property they purchased next to the Store six years ago.

“The people out there are angry. No commissioner would ever get re-elected who tried to help them out,” Coletta said.

At the last hearing on Dec. 29, Judge Lauren Brodie echoed the words of Judge Hugh Hayes: “Put the road back the way it was” – a paved thoroughfare that crossed the heart of Chokoloskee for more than a century and, in fact, was a prescribed county road. Collier County is a partner in the legal actions against FGG.

FGG did, in fact, replace the torn out landscape with a road of sorts, but it did not meet the criterion set by the two judges. Most vehicles, in particular tour buses, could not safely traverse the road. Judge Brodie gave FGG 45 business days to replace the road. That deadline will be up on March 1. As of Feb. 16, there has not been any action by FGG to comply with the judge’s order.

County attorney Steve Williams, whose mistaken assessment of the road ownership convinced FGG to remove the road, has been in discussions with FGG about a proposal to rebuild a new access road that would make the property more “developable.” Williams refused to discuss the case with The Seminole Tribune.

FGG attorney Jim Kelly, however, confirmed that his group would like to work out a compromise: “We want to build them a beautiful road…just in another part of the property,” said Kelly, who also said that FGG has never lost money on any land investment.

“These guys don’t want to give up,” Kelly said. “There’s no thought about cutting our losses.”

When he learned about the discussions about moving the road, Coletta vowed to head it off at the pass.

“I don’t think our county attorney has any business doing anything with those guys but make them follow the Judge’s order to the letter of the law.” (According to Coletta, Williams called Seminole Tribune reporter Pete Gallagher “a troublemaker” and warned the public official not to talk with the paper.)

McMillin said she is being “intimidated” by her own attorneys, as well as county attorney Williams, to reach a compromise with the developers to move the road to a new location “that will make it easier for us to develop and/or resell the property,” said FGG attorney Kelly. “That is what FGG does.”

“I don’t see why we have to waste another six months arguing about the road. And don’t forget, there are neighbors out there who are affected by any change in the road,” McMillin said. “Why not pave the road, so we can go back into business and then we can talk?”

According to McMillin, county road officials are joining in with FGG in declaring that “Mamie Street is not a county road. Even though the Judge declared that it was, they claim they will not maintain the road. That road has been here and used by citizens for a hundred years. For most of that time, it was the only way you could get to the post office. It satisfied all the requirements and the Judge made a decision.”

With legal costs mounting and no end in sight, McMillin feels she is being unfairly used to forge a compromise that will benefit FGG. At this writing, she is not sure she will ever sign any “deal” with FGG until after the road is paved: “I’m not sure of anything, anymore. I don’t have the money to fight these guys. And the county knows it. But, when it is OK to defy a judge, when county employees can refuse to support legal decisions, something is really backwards! Why are these guys being given special treatment? Somebody in Collier County government is hiding something. Somebody needs to look into this case!”