BIG CYPRESS — The Ahfachkee Warriors’ fledgling basketball program completed its second year with strong improvements from both the girls’ and boys’ teams.

The Lady Warriors finished their season with an astonishing 11-3 record, while the Warriors boys surged to a final record of 4-9 – a noticeable improvement from their 0-5 start back in December 2011.

Neither team qualified for the Florida High School Athletic Association’s basketball playoffs because the state’s athletic governing board requires a new athletic program to serve a two-year probation period before it can qualify for the postseason. But now, the probationary period is over.

“We couldn’t be more excited about getting off probation,” Ahfachkee Lady Warriors head coach Kristin Stoots said. “It’s been a really good two building years for our program. We’re looking forward to a lot of positive things to come in the future.”

Next season, the Warriors will be eligible to join a district. Since Ahfachkee is classified as a small school, the FHSAA will likely place the Tribal school in a Class 1A district, the smallest classification possible.

One thing’s certain: the Ahfachkee Warriors basketball program will continue on its upward march toward greatness, something that makes the Warriors boys’ head coach Cicero Osceola proud.

“I think we’re going to be tough next year,” Osceola said. “We’re a small school, but we don’t mind playing anybody. It’s a great opportunity for us because we’ll get to play a 22-game schedule. We’ll get to play for district, regional and state championships. And now we’ll get to pick more teams and travel a lot more. It’s a really good look for our program.” 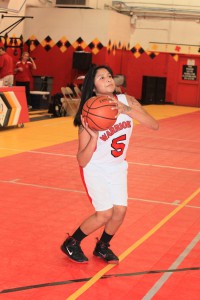 The Lady Warriors went 7-3 after a 4-0 start to their season.

“I was very impressed with how the season turned out,” Stoots said. “We had a wide age range of girls on our team, and that could have created a lot of adversity. But they came together so well from the beginning to the end. I saw a lot of maturity and growth in the girls this season.”

“We improved our fitness a lot, which allowed us to get a lot of steals off our opponents. I really saw a lot of movement from our girls, and it showed in our record,” she said.

“There were days that I would cancel our practices just to have team-building sessions with the girls,” Stoots said.

The Big Cypress Community showed full support for the Lady Warriors throughout the season – particularly at home games.
“In our home games, you couldn’t even find a seat anywhere on the bleachers,” Stoots said. “The girls received a huge boost from all the support they got this season.”

Although the girls’ season finale against Donahue Academy turned into a loss, Stoots was still pleased with their efforts at the Jan. 27 homecoming game.

“We had only eight players to suit up for the Donahue game,” Stoots said. “We were the clear underdogs in that game, with a few of the Donahue players on their way to college. But I was proud of the way our girls hustled and hung in there. They knew they were playing a bunch of juniors and seniors from the Donahue team. And here they are at 10, 11, 12 and 13 years old, hanging right with them. It’s just a sign of where our program is going to go in the future.”

“We’re going to look at a few summer camps to further improve our team bonding,” Stoots said. “The girls will definitely be working out a lot in the offseason together. If they keep their grades up and stay as friends, then we’ll be ready to go next season.” 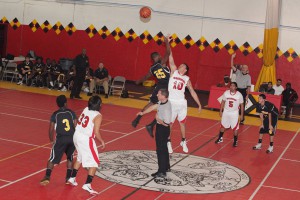 The Ahfachkee Warriors boys’ basketball team had a challenging 13-game schedule, as they finished the 2012 leg of their season with a 4-4 record after a 0-5 start.

Regardless of the final record for the boys’ team, Osceola said he was proud of his players for persevering to the end of the season.
“They showed a lot of resiliency, and they never gave up,” he said. “Our defense wasn’t very good in the beginning of the season. We weren’t communicating too well, but as we played more games, it got a lot better.”

Osceola said he motivated his team to come together as a more cohesive unit.

“Our seniors were already ready to go, but our young guys weren’t ready yet,” Osceola said. “We had to get them focused and see the game more visually.”

Ahfachkee experienced their first-ever win on Jan. 9 – a 60-43 road win over Heartland Christian.

“We kept pulling together, and it finally started to pay off for us,” Osceola said.

Aside from the 77-53 blowout loss to Cape Coral Christian on Jan. 10, the Warriors never lost by double digits again the rest of the season.

Moore Haven, a team that blew out Ahfachkee by 40 points in their first meeting, won by just 7 points the next time around – a 51-44 victory over the Warriors at Big Cypress on Jan. 19.

And Donahue Academy, another team that handed Ahfachkee a 40-point loss earlier in the season, defeated the Warriors by just 6 points in the Big Cypress team’s season finale on Jan. 27 – a 51-45 win for Donahue.

“Teams that were beating us a lot weren’t able to do that again,” Osceola said. “It seems like we always got off to a slow start and got better in the second half of our games.”

“We overcame a lot of adversity and now our younger guys can build from that next season,” Osceola said.