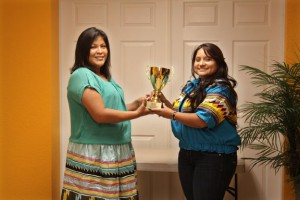 IMMOKALEE — The Harlem Shake video craze went viral earlier this year as thousands of people uploaded their versions of the dance movement to YouTube. Seminole Media Productions’ Broadcasting Department invited all reservations to strut their dancing skills in a Harlem Shake video contest, and the Immokalee community took first place with 54 votes out of nine videos submitted.

Broadcasting manager Sunshine Frank presented the award to the community on July 30.

“We knew of the contest going on, so we said it’d be a perfect opportunity to have fun and to get Immokalee a first-place trophy,” said Culture aide Amy Yzaguirre, who accepted the award on behalf of the participants.

Videographer David Diaz proposed the video contest as a way to generate interest among Tribal members, especially youth, in the media field.

“Social media is so powerful right now that whatever is trending, people want to be a part of it,” Diaz said. “I think it went great. It’s the biggest response of anything we’ve put out there.”

Yzaguirre coordinated the Immokalee video by gathering the community at their Mother’s Day event. About 60 participants came together to shake it up, decked out in costumes ranging from Mickey Mouse to Elmo to Hello Kitty. When it came time to vote, she spread the word by notifying every department, posting the video on Facebook and even standing over people’s computers as they voted, just to make sure.

The Hollywood Senior Center came in a close second with 40 votes, and Paul Buster and his Harlem Shaking puppets came in third with 12 votes.

Seminole Media Productions plans to hold another video contest in the fall and encourages participation from all reservations and communities.

To view the videos from the Harlem Shake competition, visit www.YouTube.com/watch?v=8fho4MXta5A.