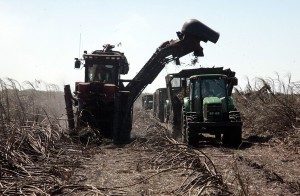 BRIGHTON — Growing sugarcane in Brighton is as natural as raising cattle; the 800 acres of sugarcane fields on the reservation are surrounded by cattle pastures. After a few years’ hiatus and a complete overhaul of the fields, sugarcane is back in full production and the recent harvest was one for the record books.

“Sugarcane has been here for years, like the cattle,” Brighton Board Rep. Larry Howard said. “The Tribe did away with it for a while, let it go wild and didn’t harvest it. The Board brought it back to life and the first harvest in about four years brought in a profit of about $1.8 million. We expect even more next year; we will plant about 1,000 acres.”

Seminoles have grown sugarcane at least since the 1880s. Author Clay MacCauley – who was asked by the Smithsonian Institution’s Bureau of Ethnology to gather information on Seminole Indians – documented it in his 1887 book “The Seminole Indians of Florida.” “The cane which had been grown there was the largest I or my companion, Capt. F. A. Hendry, of Myers, had ever seen. It was 2 inches or more in diameter, and, as we guessed, 17 feet or more in length,” he wrote.

Sugarcane is a giant grass that thrives in Florida’s sunny, wet climate. The Tribe’s fields contain six varieties of cane, some of which can withstand temperatures as low as freezing. In Brighton, the growing season lasts between 10 to 16 months, depending on the variety, and the fields can be cut more than once during a harvest, which typically goes from October to April.

“We had two cuts this year,” said James Tommie, sugarcane manager. “We cut about 15 to 20 percent more than our estimate of 40 tons per acre. It’s like we added an additional 100 acres to the farm.”

To get the neglected fields ready for a new planting, Tommie and his team leveled land, cleaned ditches, reset irrigation culverts and cut old cane multiple times to prepare the soil for new seeds. But the tedious process led to a successful harvest.

Before sugarcane is harvested, the fields are burned to get rid of leaves and chase away animals and insects. Stalks of cane remain, which are cut by large mechanical harvesters and deposited in an ever-moving line of bins pulled by tractors. The harvesters methodically work their way up and down the rows of cane until the fields are bare. The Tribe uses a contractor to harvest the cane, which is then sold to U.S. Sugar Corp. in Clewiston. U.S. Sugar processes, packages and warehouses the crop, taking it from the sugarcane to the crystallized sugar available in stores.

“I love watching it grow,” Tommie said. “Each week you don’t see anything but just green. When the plants are healthy and hearty it reflects back to what you have done. People say it’s just a grass, but you need to manage it.”

Rep. Howard readily credits Tommie and his team for the results of the harvest. In addition to sugarcane, the Board oversees the Tribe’s citrus, juice, water and beef operations, which are sold and distributed through food purveyors domestically and internationally.

“We need to make sure we keep moving forward,” Rep. Howard said. “The Board is the agriculture and economic part of the Tribe and we want to bring in more revenue. We are making strides to make it happen.”