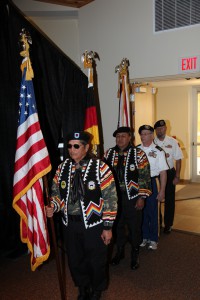 BRIGHTON — Although a few days early, war veterans young and old gathered to honor one another and to be honored in the first Tribalwide Veterans Day celebration at the Brighton Reservation Florida Seminole Veteran’s Building.

In its 24th year, the annual commemoration of the nation’s defenders held its usual significance and brought Tribal officials, citizens and community guests together on Nov. 7.

“Throughout our history (as Seminoles) we have always had warriors; all of these great warriors down the years are great to honor,” said Moses Jumper, event emcee.

The event recognized more than 70 Seminole veterans living and deceased.

“They are the reason we have what we have,” said reigning Jr. Miss Florida Seminole Jaryaca Baker. “Some don’t realize what they went through for us as Americans to have the freedoms we have.”

Former Tribal Council Chairman Mitchell Cypress of the U.S. Army National Guard said serving and protecting this country and Seminoles has always been a part of the backdrop of history.

“In my younger years I always admired them (serviceman in the military). It’s ironic that I ended up serving myself,” Cypress said.

Jones (of Brighton) served as a helicopter mechanic the majority of his Army career and was honorably discharged in 1968 at the rank of Specialist E5. For his years of service he also received the National Defense Service Medal as well as the Expert (Rifle) and Aircraft Crewman Badge. He was married to Elizabeth Molly Shore and had two children, Stacy and Duane. Jones was tragically killed in an equipment accident near his residence in 1984.

“He left us too soon to what he knew best: hard work,” said Andrew J. Bowers Jr., Brighton Tribal Council Rep. and former military veteran. “I felt privileged to make the presentation to his family. It was also great to be honored.”

Special guest speaker Dr. Robert L. Primeaux, military vet, actor, athlete and talk show host, also shared his experiences on several issues including his stint in the Vietnam War and his continued support of the ‘Why aren’t we there’ Native American Veterans Memorial Initiative headed by veteran Steven Bowers, Tribal Liaison for the Governor’s Council on Indian Affairs. The initiative maintains the goal of establishing a Native American soldier among the three existing soldiers at the world famous National Mall located in Washington, D.C.

“It is vitally important to honor our (Native) vets because it’s never really been done,” Primeaux said. “To be here is a sign of respect among us as Native people. Being in the position I am in has allowed me to be able to reach out to a lot of influential people that can draw attention to Indian issues and the Initiative.”

In the U.S., Veterans Day falls annually on Nov. 11. The day is the anniversary of the signing of the armistice, which took place on the 11th hour, of the 11th day, of the 11th month of 1918 between Germany and the Allied Nations.

Their truce ended World War I hostilities between the two groups. An Act was then approved in May of 1938, which made Nov. 11 in each year a legal holiday, formally known as ‘Armistice Day’ and was originally intended to honor veterans of World War I. Years later, World War II required the largest mobilization of service men in the history of the United States and the American forces fought in Korea.

In 1954, veteran service organizations asked Congress to change the word “Armistice” to “Veterans.” Congress approved the change and it became a day to honor all American veterans.