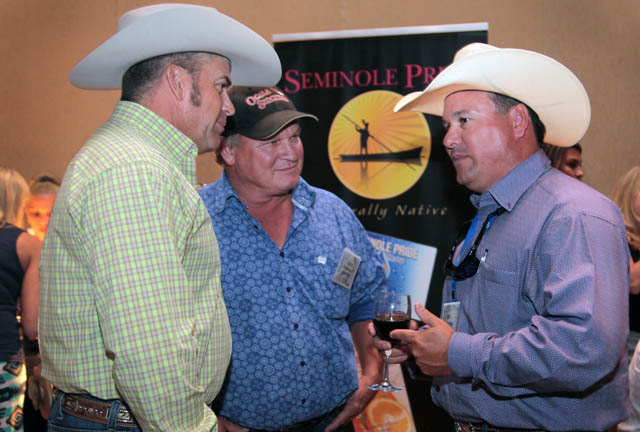 MARCO ISLAND — Natural resource director Alex Johns was named treasurer of the Florida Cattlemen’s Association (FCA) June 19 during the organization’s annual convention and trade show at the Marco Island Marriott Beach Resort. He is the first Tribal member to hold a leadership position in the 4,300-member organization established in 1934.

“It’s big for the Tribe,” Johns said. “We are engaged and involved, and I hope to help the cattle industry, which will help the Tribe and keep us in the public eye. It’s a pretty big deal; I never thought I’d be in this position.”

Johns, who also sits on the board of directors of the Florida Beef Council, is pleased the Tribe has recognition at the state level. And because members of the cattlemen’s association board rotate positions, Johns will become president in four years.

“How appropriate for a descendent of the first caretakers of cattle to be president,” said Wes Williamson, FCA’s president. “I’m looking forward to that. In the Florida cattle industry, Alex is the man. He’s a real leader.”

The five-year process of becoming president starts with serving as secretary for one year, which Johns just completed. After finishing his one-year service as treasurer, he will serve two years as vice president, one year as president-elect and finally, president.

“They groom you,” Johns said. “It’s a long process so you know what to do when you get to be president. I couldn’t do it without the support of the board; they give me time to devote to it.”

President Tony Sanchez Jr., who attended the convention with the other members of the Tribal Board of Directors, looks forward to Johns’ appointment to president.

“That will be a historic day for him and the Seminole Tribe,” President Sanchez said. “If not for us, there would be no cattle business in Florida. It’s important for the Tribe to play a prominent role. People respect what we’ve been able to accomplish in the cattle industry.”

FCA members represent millions of acres throughout the state and hundreds of thousands of cattle. The organization’s annual convention held June 17-19 addressed topics ranging from research and education, animal health and inspection to land management, marketing and membership.

A panel with top water management executives from districts throughout Florida opened the three-day convention to discuss water issues – a statewide concern. The Northwest district, for example, is dealing with large amounts of nitrates in the water from fertilizer runoff, while the Southwest district is trying to prevent saltwater intrusion. South Florida is in the midst of a massive Everglades restoration program and is attempting to solve Lake Okeechobee’s water quality, flood control and storage.

“It’s important to listen to the concerns of other cattle owners,” Hollywood Board Rep. Steve Osceola said. “We know our problems, but it’s good to hear what is going on in the rest of the state. The water flows from north to south, so their issues affect us.”

The Florida cattle industry, a cow-calf operation that makes profit off the sale of calves, sells about 800,000 calves annually throughout the state. Often calves are sent to feedlots out of state to reach a certain weight before they are sent to market.

FCA aims to keep as many calves in Florida feedlots to develop Florida beef as a larger brand.

Once calves leave the state, they lose the ability to be labeled as being from Florida, Williamson said.

“It was always cheaper to send the calf to the feedlot than to bring the feed to the calf,” Williamson said. “But that’s changing; it’s a good environment to feed cattle here now.”

“We were the only Florida producer who could handle it,” he said.

As FCA treasurer, Johns will maintain the organization’s finances, increase membership and attend about a dozen meetings of the FCA and Florida Beef Council boards of directors. He will still oversee the Tribe’s operations, as well.

“There aren’t enough words to describe the amount of work Alex puts in and what he’s accomplished,” President Sanchez said. “He’s my source of information and my security blanket.”

Johns is honored by his new role.

“I’m proud to represent our people,” he said. “I’m glad to be the person to tell our story firsthand.”