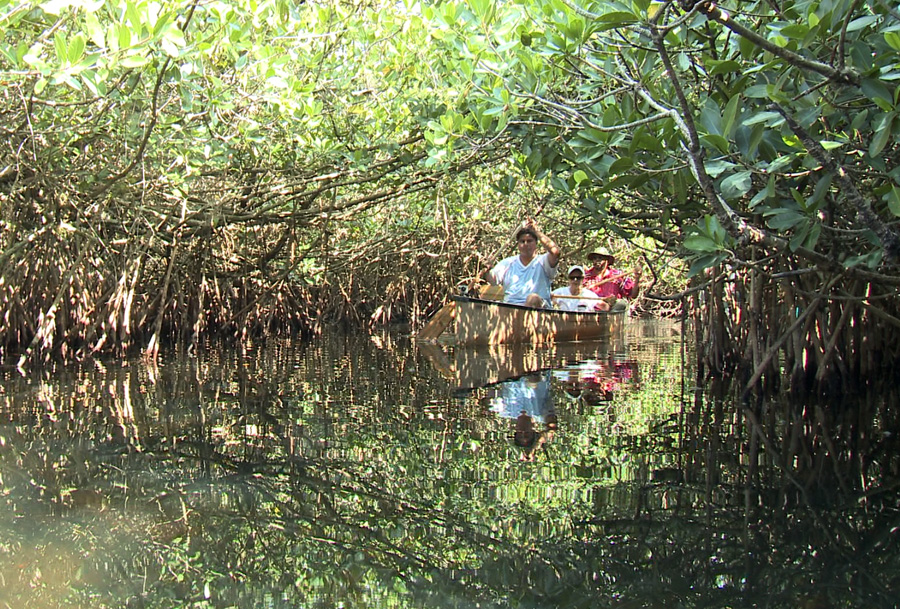 CHOKOLOSKEE — A traditional Native American canoe journey takes a group of people to distant destinations. In the Pacific Northwest, the watery treks can take weeks and cover hundreds of miles in the open ocean.

The Seminole Tribe recently completed its first modern canoe journey down the Turner River in Big Cypress National Preserve to Chokoloskee Island in Everglades National Park. Although it was only a 9-mile journey, those who participated agreed the nearly eight-hour adventure was unique.

“It was what I expected,” said event organizer Pedro Zepeda, Traditional Arts and Outreach coordinator at the Ah-Tah-Thi-Ki Museum. “It was a new experience going down the river, but it’s a trip our elders took on a regular basis.”

Several Tribal members participated in the journey on Feb. 24, and each one gained insight into the past along the way.

“It was awesome,” said Celeste Billie, of Big Cypress. “I see what my people went through going from island to island in dugout canoes; it was an all-day journey for them.”

The Turner River begins at U.S. 41 and meanders through a variety of habitats, including a cypress swamp, pond-apple forest, mangrove tunnels, prairie, open mangroves and open river. Along the way, the river was so narrow in places that the canoes and a large alligator couldn’t pass side by side. Rather than playing a game of chicken on the gator’s home base, the paddlers ceded the right of way, pulling off into the mangroves so the gator had plenty of room to pass.

At its end, the 11-mile river widens and empties into Chokoloskee Bay. The journey ended a short paddle from the end of the river to the historic Smallwood Store, a former trading post dating to 1906, where family waited for the adventurers with food and drinks.

“The last half of the river was tough,” Zepeda said. “It was a long trip, but I hope we’ll do another one, maybe here or maybe somewhere else.”

Billie and her fiancé, Juan Diaz Rodriguez, found the river challenging, particularly the alligators in the mangrove tunnels. To make matters more difficult, the incoming tide flowed against them and they had to paddle hard to make slow and steady progress down the river.

“I’m glad we made it,” Billie said. “The current was tiring. But when we saw the open water, we came to life and were more energized.”

Amid an abundance of wildlife, the group stopped at the Turner River Site, a Calusa Indian shell mound listed on the U.S. National Register of Historic Places for its importance as a prehistoric population area.

“We give them their space. We saw a lot of wildlife, including baby alligators on the mama gator’s back,” said Andrews, who led the group down the river. “The tunnels were beautiful; there were a lot of bromeliads and orchids and beautiful light. It was a great day for the trip.”