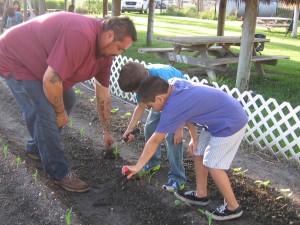 BRIGHTON — For Lorene Gopher, director of the Culture Department, language is the most important element of Seminole culture.

“Language is key because it identifies who you are,” Gopher said. “Anyone can sew our clothing and cook our food. If we don’t have language, we are just like anyone else.”

Gopher oversees a department of 22 people, including five fluent Creek speakers, who teach culture to the 254 Pemayetv Emahakv Charter School (PECS) students every day and to 23 high school students once a week.

The cultural education program is in its sixth year at the school.

“Very few people pass the language down,” Gopher said. “The youngest fluent speaker is about 55 years old, but some people say they can understand it.”

Gopher has taught the Creek language since she came to the department in 1995 and traveled to schools in Okeechobee twice a week to teach Tribal students. In 1999, she attended a workshop about teaching language, which was a pivotal event in her career, she said. From that workshop, she learned how to develop lesson plans to methodically teach language using words and pictures.

The Culture Department incorporates books of curriculum so even non-fluent speakers can teach Creek. To make the job easier, Gopher is in the process of writing a Creek dictionary.

“If we didn’t write the language down, I knew it would be gone,” she said.

For the last 10 years, she has been working on the 300-page dictionary, which will contain about 2,000 words and a historical overview when complete. Definitions will be from Creek to English and from English to Creek.

In 2004, Carol Cypress published a similar dictionary in Mikasuki, which is available at the Ah-Tah-Thi-Ki Museum.

Gopher consulted with a language committee to determine which words to include in the dictionary, but some English words have no Creek counterpart and need to be created. For example, estvmketv is the Creek word for “airplane,” but it actually means “something to fly with.” Cvto eshotcickv is the word for “typewriter,” which means “writing with metal.”

“We don’t have a word for television or computer; we’ll have to make it up,” Gopher said.

Like most children learn to read English by first learning the ABCs, Tribal children at PECS are taught Creek by learning their Ah Chee Ees. There are only 19 letters in Creek, compared to 26 in English. Younger students learn one letter per day and words that begin with it. For example, Ah is for aha, which means “potato.”

“The culture was never meant to be in the classroom,” said Culture teacher Jade Osceola. “We are trying to incorporate it into the 21st century.”

PECS students attend daily Culture classes in addition to academics. Some teachers try to incorporate Creek words into the academic curriculum, but the language is mostly taught in Culture classes. The sixth-graders have had Culture class every day of their school career, so Osceola believes monitoring the group will be interesting.

“There is a consistency in the Culture classes,” she said. “It’s more of a family atmosphere. We see them every day at school and at events in the community. There is a closeness since we share the culture with them.”

Elders teach students the language and are referred to as Grandma Jenny (Shore), Grandma Mollie (Jolly), Grandma Lorene (Gopher), Grandma Martha (Jones), Grandma Alice (Sweat) and Grandma Emma (Fish). The designation adds an additional measure of respect for the culture, as well as the women, because culture elements were traditionally taught by grandmothers and aunts, Osceola said.

Part of the curriculum takes place outside at the camp behind the school. There, the garden thrives, the fire burns and lessons are learned.

“There are teachable moments when someone messes up,” Osceola said. “More teaching goes on around that fire than you could ever do in the classroom.”

Students demonstrate a sense of pride every time they wear beadwork and patchwork. Identifying with the culture reinforces it and fosters more learning. A class of eighth-graders recently discussed the importance of learning their culture and the impact it has on their lives.

“To carry on the culture so it doesn’t die,” Brady Rhodes said. “And so we can pass it down to our kids.”

“It helps our identity of who we are,” added Aiyana Tommie. “To be a Seminole, we have to have language and many traditions. It’s good to carry on the dos and don’ts; if not, then no one would know what to do and what not to do.”

“A Tribe needs a certain amount of things to be considered a Tribe,” Rudy Juarez said. “They need language, a system of government and land.”

“The legends are also important to the culture,” added Mason Sweat.

For Osceola, knowing the Tribe’s history is critically important to its future.

“We tell the students you never know who you are unless you know where you come from,” she said. “It shapes who you are and where you want to go in life. The future is shaped by the past and we want them to be proud of who they are and who their ancestors were.”