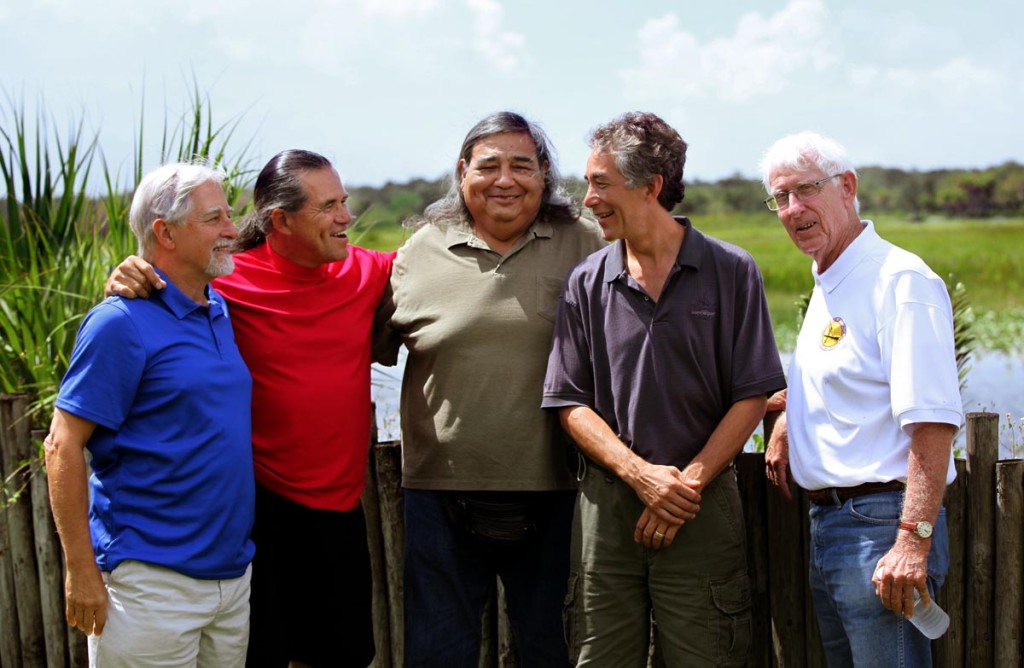 In fact, the Seminole Tribe of Florida and the Swinomish Tribe, near Skagit County in Washington, have cemented the “first true native-to-native” business endeavor in the United States – albeit with 3,350 miles between them, said Anne Jennings, economic development specialist at the Bureau of Indian Affairs (BIA) in Washington, D.C.

“That’s what makes it so exciting,” Jennings said. “If two Tribes from the farthest locations in the nation can make it work, then all other Tribes can fall in.”

Joe Tillman, founding director of the Seminole Pride brand of products that includes water, citrus juice, beef, fresh fruit and fruit baskets, said the first transaction between the two Tribes happened about six months ago when Seminole Pride shipped pallets of orange juice to the Swinomish and in return received 1,600 cases of canned salmon from the Swinomish Fish Co. The juice is available at the 13moons steakhouse on the Swinomish Reservation, while the salmon is served at the Council Oak restaurant in the Hard Rock Hotel & Casino Hollywood.

During the past year, the restaurant has occasionally served up Seminole Beef.

“I just had a Seminole Beef rib eye (steak) a few days ago and it was delicious,” Olson said.

The Swinomish, known as the People of the Salmon, specialize in five major salmon: king, sockeye, Coho, pink and chum. Olson said steelhead trout is also a top seller.

Jennings said she had wanted for nearly two decades to see Tribes build mutual economic strength but needed first to establish a coalition of Tribes who could make it happen. She met Tillman about five years ago when he was already finding success in citrus groves but wanted to expand.

“Then he called to tell me about Seminole Pride, a name that would sum up both the quality of the product and the spirit of the Tribe,” Jennings said. “I asked then if the Tribe would be interested in Federal efforts for a ‘native-to-native’ initiative.”

The project took a year to finalize.

Seven Tribes now make up the consortium with the Seminole and Swinomish Tribes leading the way to establish a completely Native food product line.

“What has evolved are nine companies, each in different regions (of the United States), putting together business-to-business food projects,” Jennings said.

Jennings said the consortium has no formal name which allows each company to remain independently branded and focused on individual products. So far, Wal-Mart and Costco are interested in filling store sections with Native-only products, but Olson said the group is concentrated now in supplying Tribe-owned casinos.

Popcorn is coming from the Lower Brule Tribe in South Dakota; coffee beans are being roasted and packaged by the Shinnecock Tribe, of New York; chocolate is a product of a Chickasaw Nation’s factory in Oklahoma; and breakfast burritos are from the Standing Rock Sioux Tribe in North and South Dakota.

Other items include wild rice, jellies and jams from Red Lake Nation in Minnesota, and chicken sausage and other breakfast poultry from the Cherokee in North Carolina.

Jennings said the Swinomish have so far pooled 40 Tribes in the northwest and plains regions, Alaska and Canada to participate.

But the newest hurdle for the native-to-native economic initiative is shipping.

“The idea is to eventually get all Tribes that produce agriculture to get their products sent to a hub for distribution,” Olson said.

Tillman said discussions are underway with U. S. Foods and Food Services of America to ship Native American products nationwide. The BIA has its sights on a distribution facility in the center of the nation that may offer perfect positioning.

Meanwhile, Jennings is working to place the foods into Native school lunches per the Buy Indian Act of 1910, which allows the U.S. Department of the Interior to set aside procurement money specifically for Native-owned and operated small businesses. She is also pushing for the U.S. Department of Defense, also through the Buy Indian Act, to purchase foods for the United States military at home and abroad.

But commerce is not the only thing that binds Tribal businesses.

“It’s good to put faces to business partners and to feel them out for chances to expand,” Rep. Frank said.

Rep. Frank said most Tribes conduct business in isolation that does not inspire intertribal commerce. He said the development of potential partnerships has been slow and fragmented.

Jennings hopes next to increase product offerings by adding beef, fruit, vegetables and other goods from Midwest, land-based Tribes, such as the Navajo Nation. A two-way expansion will result: new Tribes will be added to the consortium with new products and the existing companies will likely launch into larger business opportunities.

“This is more than, ‘Here’s $1 million for business development.’ This is Tribal businesses helping each other’s businesses grow,” Jennings said. “It’s buying and selling for themselves and other entities in region with the Seminole and Swinomish at the lead.”