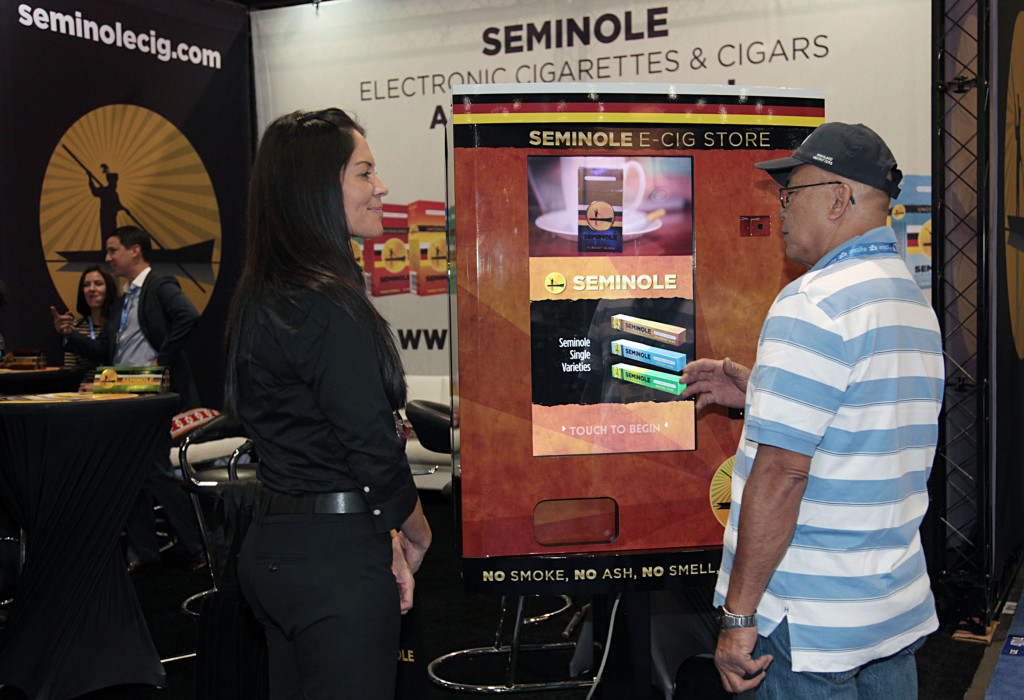 LAS VEGAS — The Board of Directors’ ongoing effort to seek and establish new business prospects took them to the Global Gaming Expo (G2E) in Las Vegas from Sept. 23-26, where they displayed their latest venture: new vending machines for the Tribe’s Seminole Unconquered electronic cigarettes.

“Our main reason for coming here was to create leads for the e-cigs,” said President Tony Sanchez Jr., who attended the conference with Brighton Board Rep. Larry Howard and Hollywood Board Rep. M. Steve Osceola. “We want to have a presence in the gaming industry and showcase our new units for the e-cigs. We’re trying to create a buzz. We’ve been one of the busier spots on the floor; when you always have bodies around, that’s a good sign.”

To create “buzz,” the Board set up its booth in a prominent location and manned it with knowledgeable people to promote the product. Visits from several celebrities also helped generate interest.

During the expo, the Seminole Unconquered sales force got commitments from five Washington Tribes, as well as from Top Wholesale, a non-Tribal distributor with 2,000 stores in Washington and Oregon. Additional companies in the U.S., Australia, Europe, the Bahamas and other Tribes also expressed interest.

“Things are moving fast,” said Joseph Brant, vice president of sales. “There has been a plethora of Tribal casinos coming by. They say they’re happy to see a fellow Tribe doing something.”

This was the second year for Seminole Unconquered to have a booth at the expo and to exceed expectations.

“The e-cig business is taking off,” Rep. Howard said. “We want to make as much happen as possible. We have a strong administration and have been making a whole lot of progress on this journey. As long as I’m here, I’m going to keep beating the bushes to find businesses for my Tribe. I was born to do this.”

The booth was busy with people visiting to learn about the product and network.

Native American actor Jeremiah Bitsui, who played Victor on the hit TV show Breaking Bad, spent time signing autographs and taking photographs with fans at the Tribe’s booth. In addition to acting, he does construction development in Indian Country. Bitsui said he welcomes a chance to partner with the Tribe on a construction project.

“My business is to see if there’s a way to help people out either by making introductions or in a more active role,” said Bitsui, who is Navajo and Mohawk.

G2E is widely known as the most comprehensive international gaming trade show and conference in the world.

About 25,000 people attended the annual event, which debuted in 2001. The newest slot machines, casino furniture, gaming tables and other ancillary items important to running a casino were on display.

During the event’s keynote session, a panel of gaming leaders discussed issues and trends driving the industry.

The future of online gaming

During sessions devoted entirely to the topic, panelists discussed strategies for dealing with online gaming, and attendees debated whether it offers opportunities or serves as a threat. Because Internet gaming is untaxed and unregulated, one member of the keynote session, Timothy J. Wilmott, equated it to navigating through a minefield.

“It’s clear as mud,” said Wilmott, president and COO of Penn National Gaming Inc. “The reality is the Internet exists and we have to figure out how to tackle it. There’s no magic switch you can throw to make it happen. There are more questions than answers.”

Valerie Spicer, executive director of the Arizona Indian Gaming Association, believes like any other business, online gaming has risks and rewards along with tremendous opportunity.

“There is a social gaming aspect to it,” she said. “It’s a marketing opportunity for a new demographic, but you need iGaming specific expertise.”

Jason Giles, executive director of the National Indian Gaming Association (NIGA), talked about the status of legislation to legalize Internet gaming in Congress. The question of who will ultimately regulate it – states or the federal government – has not been decided, and there is no indication how or when that will be determined.

“It’s been like a ping pong game between the feds and the states for the last eight years,” Giles said. “But no one in Congress is thinking about it now; it’s way down on the list.”

NIGA has stepped away from the federal versus state issue. The organization drafted its own legislation, which included principles and a direction for Internet gaming. However, everyone involved is waiting for California to decide on the issue, which could spur states to move to a Powerball lottery model – states have compacts among themselves with no federal involvement – across the country, Giles said. The big question in California is sovereignty, taxes and whether Internet gaming is a breach of the state compact.

“We can’t bring too much clarity other than the fact that consumers will drive this issue more and more,” Giles said. “We have to keep an eye on what the states do.”

Internet gaming expert Eugene Johnson, senior vice president for market research & online studies at Spectrum Gaming Group, considers it an effective way to drive traffic to a Tribe’s land-based casinos and an opportunity to interact with customers. He also believes the land-based market could be saturated and Internet gaming could be a source of new customers.

“I-gaming is coming; it isn’t going away,” Johnson said. “Ignore it at your own risk.”

The Board is investigating options for online gaming and met with content providers and support services for the industry during the conference.

“We want to be in the arena, especially when you consider the strength of the Hard Rock brand,” President Sanchez said. “We’ve had a lot of heavy meetings.”

Attending the event connected the Seminole Tribe with influential people in the gaming industry.

“We want to expose Tribal members to what we do here,” President Sanchez said. “We spent a lot of time promoting the business and talking to people. I hope they come away with a greater appreciation of the time and effort we put into this.”