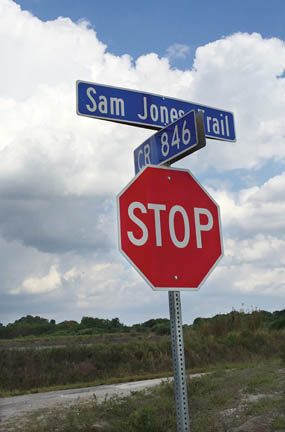 CLEWISTON — The Hendry County Board of Commissioners unanimously approved the renaming of County Road 833 to Sam Jones Trail during its regular meeting March 10.

The vote ratified a request made by Chairman James E. Billie.

The 34.4-mile stretch from State Road 80, west of Clewiston then south to the northern border of Big Cypress Reservation, was named to honor Sam Jones – also known as Abiaki – a medicine man and a leader of the Seminole Indians during the three Seminole Wars of the 19th century.

Old maps and aerial photographs researched by the Seminole Tribal Historic Preservation Office (THPO) show that CR 833 was laid down almost exactly along the primitive trail that Jones blazed through the jungles and swamps, through an area called Devil’s Garden – named for Jones, the only major Seminole War leader not captured or killed during the wars.

Today, the landscape traversed by the Trail is more pastoral than jungle, with miles of flat cattle pasture and farm fields.

“So dense were the interior Florida jungles of that era, the United States military was unable to penetrate far enough to apprehend Abiaki and his followers,” wrote Chairman Billie in a letter to commissioners. “The soldiers gave up and Abiaki’s small band of Indians remained in Florida – their descendants, today, are the unconquered Seminole and Miccosukee Indians of Florida.”

Chairman Billie said he long dreamed of naming the road after Jones: “He was the reason we are still in Florida to this day,” he said.

In Tallahassee, Rep. Matt Hudson is shepherding a similar request through the phalanx of committees necessary to grant a state designation for Sam Jones Trail. He is confident that the request will pass through the House and Senate before the end of this legislative session.

The county and state approvals will then be processed by the Florida Department of Transportation, which will install historical markers at both ends of the trail and stage a ceremony to mark the renamed Sam Jones Trail.

“It was the right thing to do,” said Chairman Billie, whose letter stressed the benefits of public awareness. “Most importantly, this honor will educate Floridians and visitors of all ages about a critical era of Florida history which has remained hidden, along with the great leader who showed the Indians the way to survival.”