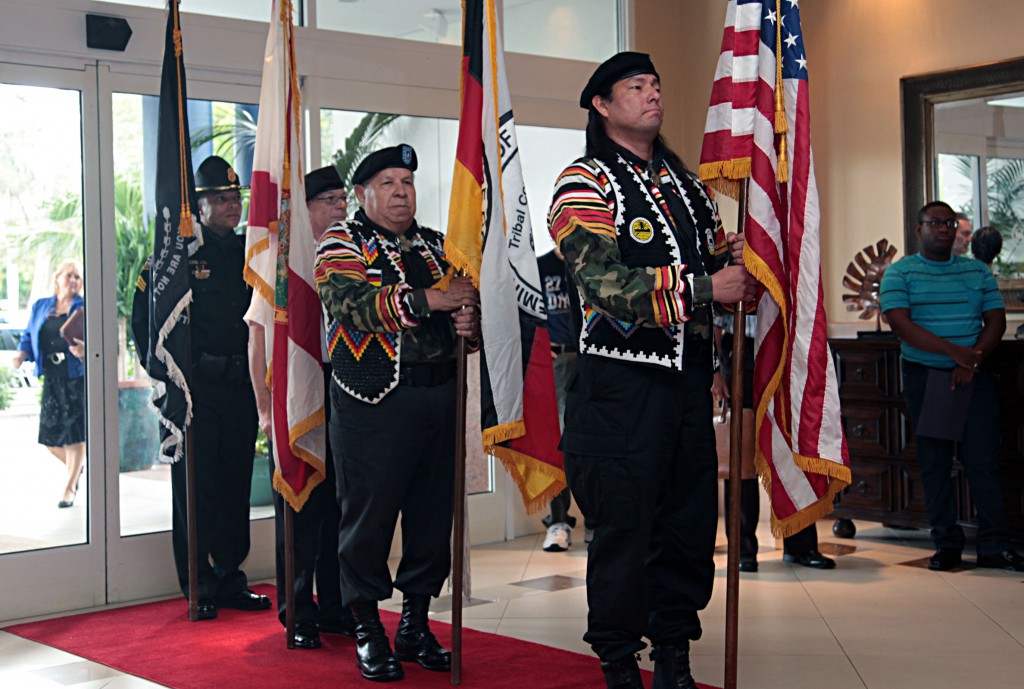 PLANTATION — A job fair to help military veterans get back on their feet offered an uplifting beat to a solemn day in American history. The Putting America Back to Work career fair, held in Plantation on Sept. 11, was officially opened with the presentation of the colors by the Seminole Tribe Color Guard. It honored American veterans and showcased the Seminole Color Guard.

Comprised entirely of military veterans, the Seminole Color Guard formed in the late 1980s so the Tribe would have its own group leading grand entries at annual Tribal Fairs and pow-wows. Nearly three decades later, the group is sought out to present the colors at Tribal and non-Tribal events throughout the country, including a Memorial Day event at Arlington National Cemetery in 2012.

“Our mission is to demonstrate that the Seminole Tribe of Florida had service men in all branches of the U.S. armed forces,” said founding member Stephen Bowers. “We have veterans who have served their country and seen combat. We are the Unconquered, but at the same time we’ve sent our men overseas to preserve the American and Indian way of life.”

When the men of the color guard enter a room, they are dressed in uniforms of camouflage fabric shirts adorned with strips of Seminole red, yellow, black and white, beaded vests, black fatigues, boots, berets and colorful medicine sashes tied to their utility belts. After they march the flags to the front of a room, they stand at attention and hold the Seminole Tribe of Florida, U.S., state of Florida and the POW/MIA flags high. When the U.S. national anthem plays, the state flag is dipped out of respect, but the Tribe’s flag is held upright.

“We hold it high because we are a nation, too,” Bowers explained. “It demonstrates our sovereignty. Presenting the colors means we are alive and proud of our heritage.”

Motlow, the latest addition to the color guard, grew up in Oklahoma far from his Seminole roots. His mother is Seminole; his father, Choctow. He moved back to Hollywood in October 2012 and has been getting to know the Tribe and its culture.

“I’ve learned we are a very self-sufficient people and are deep into our culture,” Motlow said. “That was missing in my life; I didn’t know where I was from. This has given me a chance to get to know my Tribe. Being part of the color guard has been an uplifting experience.”

Motlow served in the Navy for three years in Italy, France and Cuba during peacetime in the 1990s. His father, Joseph Roberts, was a Navy man, so he joined, too.

“It was a great experience, I loved every day of it,” he said. “Serving my country was the best thing I ever did.”

The color guard sometimes recruits veterans from the Vietnam Veterans of America to join the group. Sternberg is one such member; he met Bowers about five years ago at a chapter meeting in Fort Lauderdale and was happy to help out.

“We get to represent Vietnam veterans and the Tribe,” Sternberg said. “When I joined, I didn’t know much about Seminole history. I admire the amount of patriotism the Tribe has, especially when you take into account how Native Americans have been treated. I also admire the way they are keeping their Native traditions alive.”

In a pinch, Bowers will also call the Seminole Police Department to fill in. SPD Sergeant Carl LeBlanc recently presented the colors with the group at the career fair at the Sheraton Suites hotel in Plantation on Sept. 11.

(SUBHEAD- Putting America back to work)

The second annual Putting America Back to Work career fair featured more than 30 businesses from around South Florida including Seminole Gaming, which had more than 100 positions to fill.

“About two years ago we made the commitment to hire veterans through our Hire a Hero initiative,” said Michelle Coleman, director of talent and internal marketing for Seminole Gaming. “Since 2010 we’ve hired 648 veterans in our casinos. They served our country and we thought on Sept. 11, this was the right place to be.”

Award-winning journalist and radio personality Geraldo Rivera broadcast his national talk show live from the event, which was sponsored by radio station 850 WFTL. Rivera has appeared at other career fairs in New York, Los Angeles and Dallas to help veterans find jobs. Although the career fair was open to the public, it focused on veterans.

“We go beyond giving lip service to veterans who need a job and try to be a helping hand to match employers with people looking for a job,” Rivera said. “Veterans have the great skills and experience employers need – strength of character, discipline and management skills.”

During the radio show, Rivera interviewed Bowers about his military service as a sergeant in the 173rd Airborne Brigade in Vietnam and about the Tribe.

“The Seminole Tribe is one of the biggest employers in Florida and we want to hire veterans,” Bowers said. “We need to put them to work so they’ll have a feeling of self-worth and self-esteem. They served our country and we need to give back to them.”

The crowd gathered in the lobby gave a hearty round of applause.

Hundreds of job-seekers, military and non-military alike, attended the career fair. Lines of applicants formed at the Seminole Gaming booth, all eager for a chance to work for the Tribe.

“These face-to-face events work for us,” said Gregory Calvert, director of compensation and benefits for Seminole Gaming. “We get a chance to meet future team members. For every job, we usually see 25 to 100 people.”

People dressed for success mingled with service men and women in uniform at booths of prospective employers, who had about 5,000 jobs to fill.