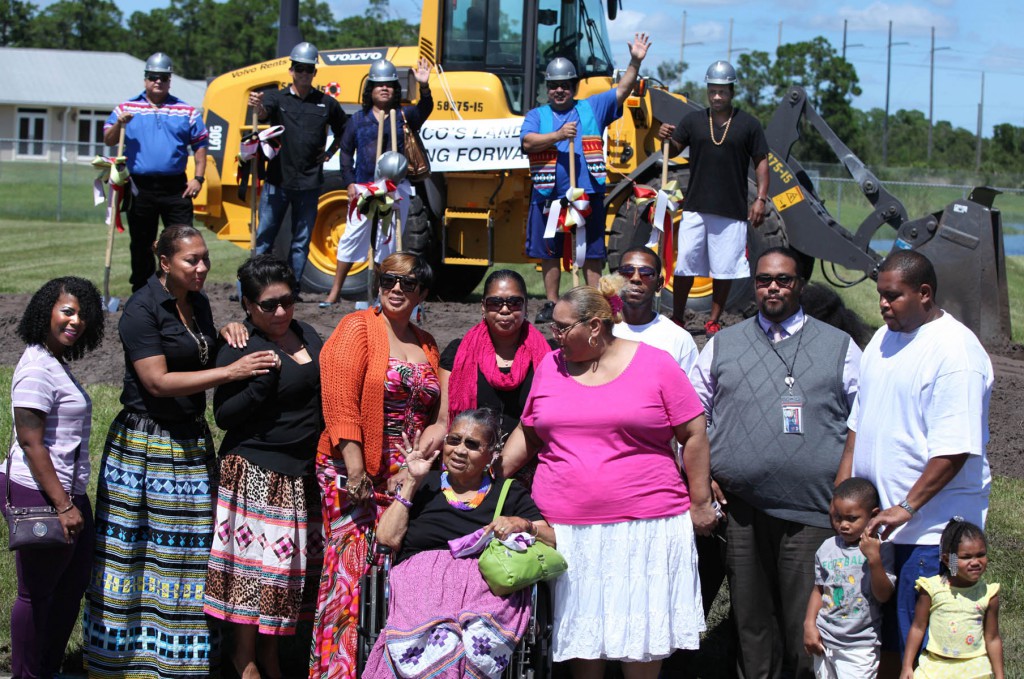 FORT PIERCE — Three years ago Tribe officials put shovels in the dirt at Chupco Landing and broke ground on the proposed Fort Pierce Community Hope Center. After 35 months of near inactivity, “hope” was restored when a bulldozer ceremoniously roared onto the job site to officially launch construction.

About 30 residents and Tribal leaders gathered for the Sept. 20 event dubbed Chupco Landing “Moving Forward.”  Construction on the 17,000-square-foot building will likely begin in four to six weeks.

Sally Tommie, a mover and shaker in 2008 when she served as the Fort Pierce Liaison, said leaders on each reservation were then directed to come up with a list of “needs and wants.” At Fort Pierce, the most obvious need was a community center because meetings and functions were being held in tents or in the ballrooms of local hotels.

Plans for a two-story, environmentally friendly, LEED-certified facility to house Tribal departments and a second-floor gymnasium were first stalled because of cost concerns. Later, after a 2010 groundbreaking at the lakeside site, the plan was again placed on the back burner in the midst of administrative turnover.

Hollywood Council special assistant Alexander Tommie, who lives primarily in the Fort Pierce community, said the time to get the job done has finally arrived.

“When I was elected, my goal was to have the building done by the time my term is over,” Councilman Osceola said at the “Moving Forward” ceremony. “I’m lucky as a Councilman to have walked in when the stars were aligned and be able to hit the ground running.”

Project manager David Lowery, who heads Seminole-Stiles Development and Construction, said the facility will be completed by September 2014 – just in time to host Indian Day festivities. The building was designed by Mario Cartaya, of Cartaya & Associates Architects.

Though plans have been scaled down to a one-story, non-LEED building, the community center is still environmentally friendly, Cartaya said. Every room, including the gymnasium, will feature windows to allow plenty of natural light. The partially screened swimming pool will be heated by the sun.

The facility will house a clinic, fitness center, gym with basketball and volleyball courts and retractable bleachers, as well as department offices and classrooms for Family Services, Administration, Police, Housing, Culture and Education.

“Right now we have a lot of our services out of different locations and have to travel around from place to place,” Alexander Tommie said.

With the new center, Tribal needs will be served under one roof – like a one-stop shop.

“We won’t just have a pool and a gym. Administration and health services will be there. If you need to study for a GED, we’ll have Education; if you want to do bead work or carve a canoe, we’ll have Culture; if you want a (blood) sugar check, come to Health,” Alexander Tommie said.

The name of the center has not been decided but it may be named for Sally Tommie’s late aunt Hope Tommie Wilcox, who grew up one of 13 children born to Jack Tommie, of the Panther Clan, and Sally Chupco, of the Bird Clan, in Fort Pierce. The community is made up predominately of Tommie/Chupco family members.

Sally Tommie said “Hope” is not only a virtuous name.

“Hope is at the heart of the center. The building is hope for all to come together as a family and arrive together at success. The building does not belong to Fort Pierce. It belongs to every Seminole on all reservations,” Sally Tommie said.

Bessie Tommie, the only surviving Tommie/Chupco sibling, attended the celebration flanked by her son Kevin Tommie Sr. and daughter Jane Stockton, who is now serving as the Fort Pierce Liaison. All are thrilled that the building will finally rise.

Sally Tommie is also grateful that the wait is over.

“It’s been like being pregnant, carrying the child and wanting to see the birth,” Sally Tommie said.