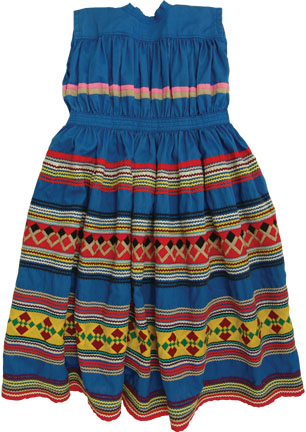 The next exhibit at Ah-Tah-Thi-Ki Museum, on display from Dec. 8 to Nov. 30, 2015, will attempt to explain how traditional Seminole clothing is not a costume using 27 contemporary patchwork garments for every age, gender and purpose.

“We demonstrate that patchwork is worn every day for all reasons and that the style demonstrates the pride of being Seminole and the understanding of Seminole history,” said Rebecca Fell, co-curator of the show, called “It’s Not a Costume – Modern Seminole Patchwork,” with Seminole artist Jessica Osceola.

Twenty-five of the pieces are from the Museum’s permanent archive. Two items, a boy’s medicine coat and a men’s big shirt, are being stitched specially for the show by Tribal members.

But the exhibit will not be about history as much as it will attempt to express the normalcy of patchwork attire as it continues through time to dress the present. Some “throwback” pieces will mimic historic characteristics but most are modern creations no older than the 1970s and ’80s.

“We’re focusing on the idea of everyday wear and the importance of patchwork to culture and history – that is what ties all of the pieces together,” Fell said. “But our real emphasis for non-Tribal visitors is to help them understand that the clothing is not a costume. It is what is worn as part of daily life.”

Conversation bubbles, assigned to some skirts and shirts, will feature dialog to further bring home the ordinary function of the garments.

Fell picked a vibrant indigo blue dress with many intricate rows of patchwork and rickrack to advertise the exhibit’s opening reception Dec. 13 from 1-3 p.m. The dress, donated to the Museum by Diane Buster, was made by Seminole seamstress Rosa Billie.

Osceola said the dress, like patchwork itself, is timeless.

“I don’t see it as an artifact of the past. It is a modern, living thing. It is here and now; a girl’s dress and because women carry on the traditions of life, it brings us full circle,” she said. Every version of patchwork clothing will be represented: women’s dresses, men’s coats, men’s shirts, a cape. Several dolls will be displayed to show how entire outfits would be pieced together.

The opening reception will include a light lunch buffet.

Osceola, a Masters of Fine Art candidate at the Academy of Art University, was featured in the 2011 and 2012 Art Basel in Miami Beach. Fell said the curating duo’s choice to name the show “It’s Not a Costume – Modern Seminole Patchwork” was accepted favorably by Tribal members.

“They get a sense that people look at them wearing patchwork and see a costume, but outsiders are wrong. Irish girls who step dance on stage in special skirts and jackets wouldn’t ever wear those clothes to the grocery story because they are costumes,” Fell said. “Patchwork is for everyday wear. It’s Seminole fashion. It’s how they talk about themselves. It’s identity.”