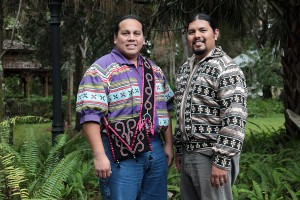 NAPLES — The art Brian and Pedro Zepeda have created for years has found a temporary home at the Collier County Museum in Naples.

The brothers’ creations will be featured, along with paintings and giclées by Guy LaBree, at the museum through June 30.

Brian began creating beadwork with loom beading. His interest in bandolier bags arose in the late 1990s when the Ah-Tah-Thi-Ki Museum asked him to make reproduction items for displays.

“No one I knew was making bandolier bags, so I learned how to make them myself,” said Brian, who serves as the Naples Council Liaison. “My late uncle taught me the rules and specs for them, and I found images from other museums. I made a lot of mistakes on the first one, so I took it apart again and again until I figured out how to do it.”

Most of the eastern Tribes – including Cherokee, Choctaw, Creek, Chickasaw and Mohawk – have versions of the bags, so Brian reached out to artisans from different Tribes for advice. They traded stories about the difficulties encountered while making the bags, which are typically beaded on thick wool fabric.

“Now I can look at a bag and know who made it or who the teacher was,” he said.

Today Brian sells his work to museums or collectors and often produces pieces on commission. Depending on the size of the beads and the intricacy of the design, it can take up to six months to complete one piece. His inspiration for the designs sometimes comes from the past, but he often designs from his imagination, he said.

Pedro, who has a bachelor’s degree in Fine Arts from Stetson University, focused on ceramics in college but is well-versed in Seminole arts and crafts. He learned to sew and cook from his grandmother and began making clothing for re-enactments at 14.

He also learned about different types of wood, where to find them and how to carve from Ingram Billie Jr.

“I just really like doing traditional arts and try to educate people about it,” he said, “especially the arts people don’t do anymore, like making clubs and leatherwork.”

Pedro carved war clubs from pop ash, a local hardwood, as well as a set of spoon style stickball sticks for the Collier County Museum exhibition. He enjoys choosing the wood and sometimes stains it to bring out its character. The museum show also includes examples of his leatherwork, including a traditional pouch made of buttery soft, brain-tanned elk and deer leather.

Prior to the opening of the Zepeda brothers’ show, historian Christopher Kimball gave a lecture on the history of the Seminoles of Naples. All 75 seats in the museum’s lecture hall were taken and many people were turned away.

Kimball discussed the Seminole Wars and showed old photos of Seminole life in Southwest Florida and Tamiami Trail, including some of the Cory Osceola and John Osceola families.

“Cory Osceola is considered the father of the Naples Seminole community,” Kimball said.

He brought the lecture into the 21st century by talking about the business success and leadership roles of the Seminoles in Naples today.

“I was intrigued by the topic,” said Phyllis Arnoff, of Portland, Ore. “The Seminoles were the first people here, yet I had no idea where they came from. Being from the Pacific Northwest, I wondered what Native American life was like in the Southeast.”

The Zepeda brothers are pleased to showcase their art and culture at the museum.

“When you do art that’s a rarity, people always come to you for exhibits, to teach or for answers,” Brian said.