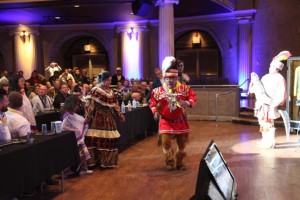 The three-day event at Universal CityWalk in Orlando was a veritable pep rally honoring an over-the-top 2013 business performance for Hard Rock, one of the most recognizable brands, owned by the Seminole Tribe of Florida.

“We achieved both our goal of increasing revenue across the board and growing our bottom line,” Allen said. “Some people say, ‘Jim you are never happy.’ Well, I suppose there is some truth to that. But whatever happened yesterday is yesterday’s news…You have to always continue to raise the bar.”

In March, the Seminole Tribe of Florida will mark its seventh year as the Hard Rock owners of 175 Hard Rock cafes, bars, hotels, casinos and live music venues that showcase the world’s ultimate collection of authentic music memorabilia in 55 countries around the world.

Allen called the company’s potential for growth as “scary in a good way” and credited its continued success to “its amazing marketing, design and development teams.”

“Hul-pah-te-chobee,” Chairman Billie called to the audience. “I brought some of my Tribal members to say thank you today. Sho-naa-bish.”

On a cue from the Chairman, two thrashing alligators were held high while being carried through the packed room by Tribal alligator wrestlers Billy Walker and Everett Osceola (assisted by Cady Thompson and Ian Tyson of Native Village).

As the gators were brought to the front of the stage, heads turned quickly toward a “whoop” from the back of the room, where Tribal Medicine Man Bobby Henry, holding his turtle shell shaker high, began to lead his family through the audience for a Seminole stomp dance demonstration, complete with call and response shouts.

“These are the people I work for and they are the ones who inherited the Hard Rock,” Chairman Billie said.

He then invited the crowd to line up for several gifts from the Tribe, including lapel Seminole dolls and colorful beads blessed by Henry.