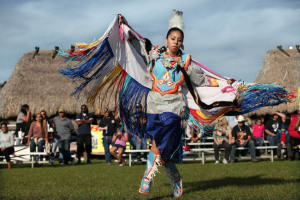 BIG CYPRESS — Hundreds of cars and trucks packed a pasture-turned-parking lot Jan. 10 in Big Cypress where more than a century ago Seminole ancestors braved wilderness, swampland and bloody battles for Native American freedom.

“The Seminole people were so tough to survive those times and then to come so far. We have to give the people a lot of credit,” said Fred Douglas, a self-described “cowboy from LaBelle,” at the Junior Cypress Rodeo Arena.

According to public records, the Bureau of Indian Affairs in 1889 purchased 160 acres in Big Cypress in reserve for the Seminoles. In 1896, more land was added. Big Cypress Reservation was formally dedicated in 1936 and now consists of 82 square miles.

Seminole and Miccosukee artists displayed and sold handmade clothing, jewelry, baskets and wood carvings in chickees amid the festival atmosphere. American barbecue was served under tents side by side with Native American frybread and sofkee booths.

The Tribal Historic Preservation Office exhibited a timeline of the Second Seminole War that spanned 1835 to the mid-1840s. The Third Seminole War began officially in 1855 in Southwest Florida and ended in 1858 with only a few hundred Seminoles in Big Cypress and other isolated areas of Florida.

“Now the Tribe is 4,000 strong and growing,” Councilman Tiger said. “For me, today means so much about what my ancestors did for us to have our freedom, and this gives us a chance to thank them for never giving up.”

Marty Thurman, a grass dancer from Shawnee, Oklahoma, told the audience that Native drumbeats are never the hard one-three beat heard in movies or at football games.

“What you hear from real Native drums is the heartbeat of the Indian people – it is not written down; it is passed from generation to generation. If your heartbeat ever sounds like the Hollywood movie beat, please see a doctor right away,” Thurman said.

Before the dancer’s finale, eagle dancer Tony Wahweotten, of the Prairie Band Potawatomi Nation, led guests in the Indian two-step, a friendship dance in which non-Natives and Natives stomped first in couples and then holding hands in a circle.

Wahweotten called performing at the anniversary celebration “an honor.”

“I’m happy to be a part of it all and to show people, and other indigenous people, how we can come together and put aside differences,” he said.

Cowboy boots and hats blended with patchwork at the cultural event that capped off with a country concert. Western duo Montgomery Gentry took the stage first. Country rocker Gary Allan later brought down the house.

Country fans Tim and Marianne Hamilton traveled from Homestead to celebrate the Seminole anniversary and attend the concert.

The couple said they admire Native history and culture. Once, on a motorcycle ride to Sturgis, South Dakota, they made a side trip to see the Crazy Horse Memorial.

“We are both people who respect Native American people. It’s always nice to see culture that is so naturally spiritual,” Marianne Hamilton said.