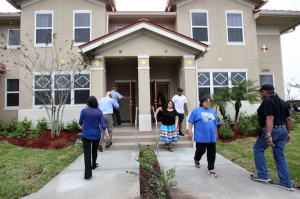 BIG CYPRESS — Julius Ivan Billie signed up for reservation housing when he was 18 years old.

A dozen years later, on Jan. 14, Billie was one of several Tribal members joyfully (and finally) checking out new digs at the grand opening celebration for the long-awaited Big Cypress townhomes.

Dozens of people toured the homes, oohing and aahing over walk-in closets, sun-drenched living rooms, pretty powder rooms and cherry wood cabinetry. On the outside, homes are landscaped with native flowers, shrubs and trees.

“I can move in today. I am so happy and so ready,” said Billie, who had been living in Clewiston and paying twice the rent for half the amenities.

Within the white-fenced enclave at the corner of Eloise Osceola Street and Cypress Lane, two buildings house six two-story, identical townhomes. Another one-story building accommodates two apartments that are compliant with the Americans with Disabilities Act (ADA): wheelchair accessible with helpful additions for the disabled, such as bathroom grab bars, lowered kitchen countertops and level-entry showers.

“It took a lot of people going through a lot of red tape and then sitting down to make it happen. We all hope to see a lot more. Maybe in five years we’ll have three times as much to show,” Nelson said.

Councilman Tiger said the project took five years of planning, requesting and funding to finally be cleared for building. The official groundbreaking was held Nov. 20, 2013.

“Today is just the start. Hopefully everyone will eventually be able to come home to the reservation,” Councilman Tiger said.

He said the next townhome cluster in Big Cypress will likely consist of four homes along Horseshoe Road.

Meanwhile, similar rental complexes are under construction on other reservations.

Nelson said designs of the same three residential buildings – two two-stories with three units each and a one-story, two-unit ADA building – are in various stages of completion at Hollywood, Brighton and Immokalee. Additionally, eight rent-to-own homes are being constructed in Hollywood across from the new Howard Tiger Recreation Center for families displaced by the new gym.

Nelson said the Hollywood and Brighton projects will be completed by late spring 2015. The Immokalee cluster will be finished by early summer 2015.

“There’s a high demand in the whole Tribe for housing. A majority of our members live off the reservation. There are a lot of advantages (to living on the reservation),” Nelson said in a news report in April when close to 120 Tribal members made up the housing waiting list. Nelson cited access to clinics, police and fire rescue, and after-school programs like 4-H and Boys & Girls Club among the perks to living in Tribal communities.

Proximity is exactly what Big Cypress new resident Clinton Billie looks forward to most. On a waiting list for 10 years, Billie had lived off reservation with his wife, Jennifer, and two children in Pompano Beach and Lehigh Acres. He popped over to Big Cypress about twice a month to visit extended family and attend big events, but the timing was never convenient and never enough.

“Now, we will be on top of everything. We’ll get the fliers, we’ll hear the word, we’ll go to everything,” Clinton Billie said. His children are already enrolled in Ahfachkee School, and he looks forward to signing them up for the mixed martial arts program at the Big Cypress Boys & Girls Club.

Finding housing off the reservation is frustrating for many young Tribal families. Tribal members can afford to rent or buy homes, but without credit and full-time jobs, they are often turned away by banks and landlords.

Clinton Billie said he had to search through Craigslist to find individual homeowners willing to learn about the Tribe and trust his income source.

Big Cypress Board Rep. Joe Frank said the Tribe’s new ability to regulate and administer land leasing agreements, presented to Chairman James E. Billie by the Secretary of the Interior on Jan. 8, should clear the slow bureaucratic course that created hurdles for providing homes as needed.

“What used to take eight or nine months (to get BIA approval) – then a few more months to get going – should take less time now. It will help speed the process,” Rep. Frank said.