Skip to content
You are here
Home > Education > Red Ribbon: Fun and games with sober message 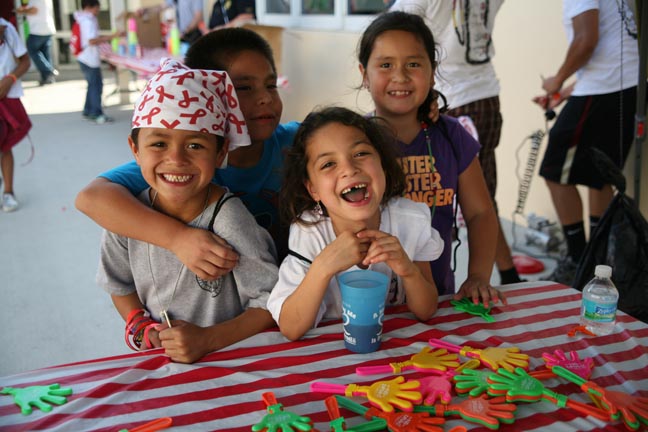 Across reservations, amid festivities that blared “A happy me is drug-free,” was a sober reminder of what makes Red Ribbon Week a matter of life and death.

The life-size Red Ribbon Remembrance Cross, adorned in ribbons inscribed with the names of loved ones lost to substance abuse or illnesses caused by long-term drug and alcohol use, was displayed at events in Immokalee and Big Cypress.

Fred Mullins, a counselor with the Family Services Department and one of the Red Ribbon Week lead organizers, said the cross, which serves as a physical, touchable, real reminder that addiction is often fatal, was nearly filled.

“People come to the cross; they touch it and pray. It’s a visible symbol that abuse is not just a community issue; it affects us personally and we have to be together against it,” Mullins said. “That’s the Seminole way – to fight against what is wrong.”

The Red Ribbon campaign started in 1985 following the torture killing of Drug Enforcement Administration agent Enrique (Kiki) Camarena in Mexico. The agent was kidnapped and murdered by drug dealers angered by information provided via Camarena that led to the destruction of a 2,500-acre marijuana plantation by the Mexican Army.

On Big Cypress Reservation, Red Ribbon Week opened with a prayer march from New Testament Baptist Church to the Frank Billie Field Office. Hosted by religious and civic leaders, several stops were made along the way at key locations, such as the Sober House to pray for those battling addiction and the Seminole Public Safety Complex for those who respond to health and safety emergencies.

The week unfolded with a family spirit night, a field day and color run, and the Red Ribbon parade featuring nearly 50 marching, riding and floating units.

“We are all affected by substance abuse – and we are all capable of falling to it,” said Moses Jumper Jr. during a post-parade luncheon.

Immokalee’s parade, on Oct. 21, was the largest since Red Ribbon commemorations began tribalwide during the past decade. More than 300 attended, including the 100-member Immokalee High School Marching Indians.

The Oct. 25 event featured a running, jumping, tossing and crawling obstacle course that capped with contestants covered in vibrant hued flour. Participants from ages 5 to 75 brimmed with laughter as they looked forward to getting peppered in color.

Still, the very serious message about prevention was as plain as black and white. Posted at each activity station was information about breast cancer awareness, drug and alcohol prevention, diabetes and kidney health, healthy eating, exercise and obesity prevention. Each station ended with a rainbow of awards – in the form of fresh blasts of color that punctuated chalk white T-shirts

The Seminole Fire Department, armed with water hoses, soaked contestants who wished to wash off.

Preschool children in Hollywood showed elders through the Plant the Promise program that they plan to grow up drug-free and strong.

“We want them to start as early as possible to demonstrate a commitment to living a drug-free and healthy life,” said Ilene Miller, preschool program manager.

The army of nearly three dozen toddlers first delivered decorated flower pots, symbolic of the promise, to elders at the Senior Center, then warmed their hearts with a recitation of the Pledge of Allegiance in Mikasuki.

A Red Ribbon Week march around the reservation further celebrated the preschooler’s promise. They were joined by a force of parents and teachers.

“We came out to be with them and it’s for a good cause,” said Joshua Josh, who filed through the street with his wife, Karla Josh, and children Isaiah, 2, and John, 7 months.

The theme “A healthy me is drug-free” was just as motivating on the Brighton Reservation when, on Oct. 20, T-shirt and poster contests launched Red Ribbon Week.

A parade the next day sent Pemayetv Emahakv Charter School staff, teachers and students – plus a cavalcade of Tribal department employees, police and firefighters – to the street for a march against substance abuse. The fun continued Oct. 23 with a color run much like the event in Hollywood.

“We tied it in with the Red Ribbon Week,” said Barbara Boling, of the Health Department.  “We wanted to do something that would involve more fun and exercise without them really thinking they exercised.”

The week was filled with activities that included every age group with a purpose of creating awareness and prevention of drugs in the Brighton community.

A Home Run Derby sponsored by Council Office was a huge success thanks to all the departments who donated time and support, said  Valerie Marone, community events coordinator for Family Services.

“We had a lot of participation from everyone and all the departments throughout the community and everyone enjoyed themselves,” Marone said. “It reinforced our theme this year, ‘A healthy me is drug-free.’ Making healthy choices is important and that the choices that you make do affect your life…in every way.”