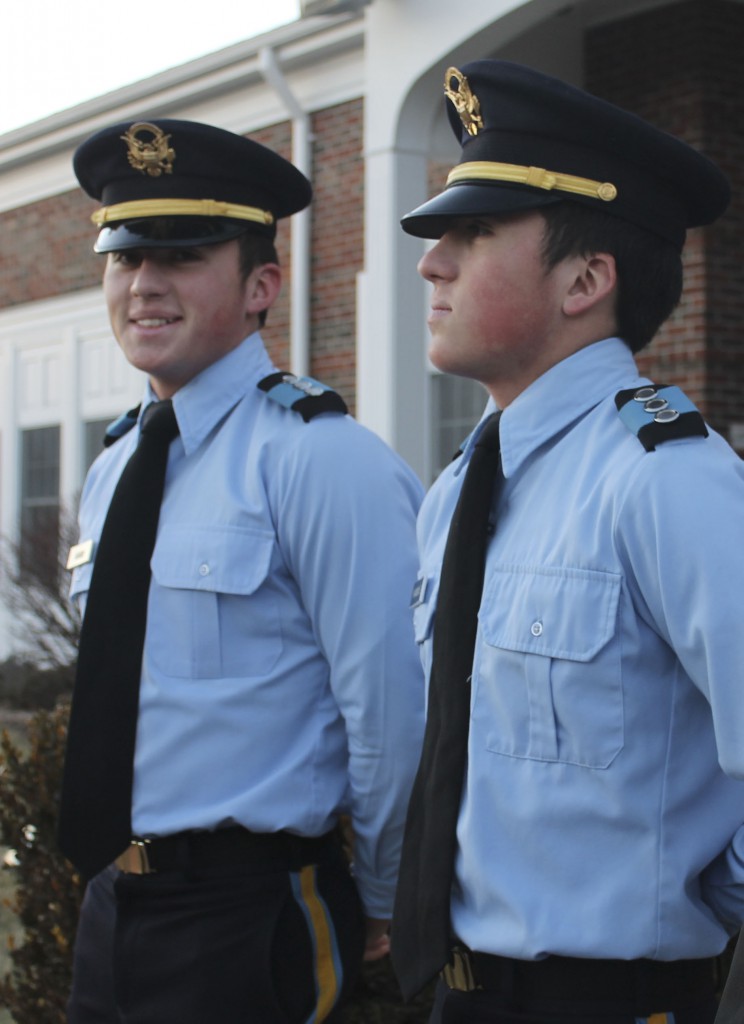 SALINA, Kan. — A childhood of homeschooling followed by military high school is not the norm for most kids, but Seminole Tribe twins Eli and Levi Harmon prove it can produce two top-notch students. The 18-year-old seniors attend St. John’s Military School in Salina, Kan. and rank No. 1 and No. 2 in their class, respectively.

The young men have each been nominated as All American High School Scholars, won the Blue Beret award several times for placing in the top three of their class and received $10,000 scholarships for academic excellence.

Levi received the Tim & Suzan Soule Scholarship for displaying a natural gift for leadership with potential to contribute to the success of the Corps through personality and personal example. Eli received the Soule Family Foundation Scholarship for the notable achievements produced by his innate skills.

“I really put academics at the top of my list of priorities. I do my homework and study before anything else,” Eli said.

Eli and Levi share similar interests and often work together in leadership positions, motivating one another with a little brotherly competition. Eli is president of the National Honor Society and Levi is vice president; Levi is battalion commander of the JROTC battalion while Eli is second in command as the executive officer.

“We get along well but we’re pretty competitive,” Eli said. “I guess that just comes from being a twin.”

A typical day for the Harmon brothers starts at 6:20 a.m. when they don their uniforms and gather for the morning formation and flag raising. After breakfast, they attend a full day of classes, followed by sports practice or a workout, then dinner and study hall. Eli plays soccer, tennis and wrestles, and Levi runs cross-country and is captain of the varsity soccer team.

“The day to day is stressful but it’s good,” Levi said. “There’s a lot to do and a lot of responsibility.”

St. John’s is a private boarding military school for boys in grades six to 12. Opened in 1887 by the Right Rev. Elisha Smith Thomas and a group of businessmen, the school aims to provide each cadet the opportunity to grow spiritually, morally, intellectually and physically. With only 231 students and a student to teacher ratio averaging 9:1, teachers can address the individual needs of each student. The school was awarded an Honor

School with Distinction from the United States Army Command.

Having been homeschooled since childhood, Eli and Levi were reluctant to attend St. John’s at first. They said they struggled with the transition into military school, but they later adapted, discovering that the unique structure of the school helped keep them on track.

“One day we had no structure and did things when we wanted to and then the next, everything was being told to us – where we had to be, what we had to do,” Levi said. “It was overwhelming for a little bit but easy to get used to.”

Their mother, Tribal member Donna Bratcher Harmon, said it was difficult sending her sons away, but when she heard how well they were performing, she adjusted, too.

“They kind of found their own identity, instead of being thought of as the twins,” she said. “[The school] always tells us that they wish they could clone our sons. We are so proud of them.”

Eli aspires to be a biomedical engineer or a physicist, and Levi plans to be a mechanical engineer. Their differing interests may pull them in different directions for college, a big change for the twins who’ve spent most of their lives together.

“It’s going to be different, but I think it’ll be good for us to be out there on our own,” Eli said.

Eli is applying to the Air Force Academy and the Colorado School of Mines, an engineering university that specializes in geosciences.

Levi applied as an early decision applicant to the Virginia Military Institute, which accepts less than 50 percent of applicants according to U.S. News & World Report.

“It’s a lot more structured (than most universities). You have to abide by rules that other college students don’t have to,” Levi said.

Both have post-grad military plans as well – Eli wants to be commissioned as an officer in the Air Force, while Levi will opt for the Marines – and both share a common role model.

“My mom has always been a hard worker and I’ve never really seen her ever complain about hard work and I value that,” Eli said.

It was Donna, along with her husband, Edward Harmon, who alternated teaching the twins at home. Eli and Levi were born and raised in Flagstaff, Ariz., but they visited the Brighton Reservation, where Donna’s family is from, throughout their childhood. Councilman Andrew J. Bowers Jr. is their uncle and Chairman’s assistant Norman Bowers is Donna’s cousin.

Eli and Levi’s advice for success is simple.

“Set goals for yourself in everything you do because setting goals is how I focus my efforts,” Eli said.

“Don’t accept anything that isn’t your best,” Levi added. “If you do work and it’s not the best you can do, don’t be OK with it.”