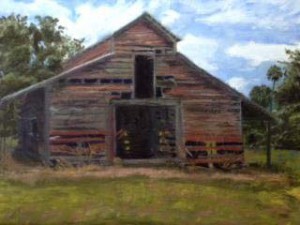 BRIGHTON — Proud and precarious, like a lone weathered cowboy standing still in a gusty green field, the historic Red Barn withstands the ghostly fade of time.

Windswept, battered, craggy and gnarled, the cypress-planked barn was once bright red and full of community.

Built in 1941 by the Indian Division of the Civilian Conservation Corps, the Red Barn was the hallowed centerpiece of the Brighton Reservation, where the 13 stables held the top cowboys’ horses, thick nails hung heavy leather saddles, hay was stored in the loft above, and the first flames of Tribal government were fanned at meetings and get-togethers among the poor Seminole Indians.

The beloved Red Barn, 16 years older than the organized Tribe itself, was the Seminoles’ first town hall.

Seminole Indians have worked cattle since the fleeing conquistadors left their horses and cows. But the Seminole Wars and the depression that was Florida after the Civil War scattered the Indians and depleted their first industry. To jump-start it again, the Bureau of Indian Affairs sent a herd of Apache cows and Brahma bulls to the Seminoles in 1936. Five years later, the Red Barn was built, along with a water tower and troughs where cattle were treated for ticks and disease. Today, the Seminole Tribe of Florida maintains one of the largest calf-producing operations in the country.

The old Red Barn hasn’t been regularly used since the 1960s.

The main part of the reservation has moved 3 miles east, and Hurricane Wilma took its original wood shingle roof in 1985. Worried the sacred barn might fall, the Tribe held it together with a shiny steel roof in 2005. Still, the elements of rot and disrepair robbed the grand icon of its splendor. It was home to termites and an owl that swooped from the loft to scare intruders. The doors fell off, the wooden walls pocked and developed holes, and the unforgiving heat of the cruel Okeechobee sun took its toll. It was used as a haunted house during Halloween, and believing the barn harbors ghosts of old cowboys, children stay away to this day.

On Jan. 26, the Seminole Tribe is inviting Tribal members and the public to the Brighton Reservation to take part in a ceremony celebrating the planned rejuvenation of the Red Barn, including the unveiling of a roadside historical marker, a National Register of Historic Places plaque and conceptual sketches of several restored Red Barn scenarios created by Hard Rock International designer Rob Schaeffer. It may anchor a park, serve as a museum or even be restored as a working barn for 4-H students.

So far, only necessary structural repairs are planned for implementation.

“We want to hear from the community. We want to know what the people envision for the future of this precious historical structure,” said Tribal architectural historian Carrie Dilley, who wrote the successful National Register application.

Scheduled is a midday program of music and history, beginning with a 10 a.m. cattle drive by the Seminole Cattlewomen’s Association. Seminole Media Productions will present its film about the Seminole cattle program and interviews with Tribal cowboys who remember the Red Barn in its heyday.

A raffle/sale of Tribal arts and crafts and items donated by local businesses will be conducted, and prints from an original “en plein air” painting of the Red Barn by artist Dorothy Gardiner will be sold; all money collected will be earmarked for the Red Barn rejuvenation project.

There will be remarks by Tribal officials, a rib-eye steak dinner for all attendees and music from the Andy Buster Band.

Portions of this article were originally published in FORUM, the magazine of the Florida Humanities Council.