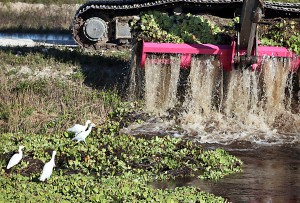 BIG CYPRESS — If it seems like the canals along Snake Road in Big Cypress are disappearing beneath a blanket of foliage, they aren’t.

The abundance of water lettuce and water hyacinth plants is a result of the extraordinary amount of rainfall in 2013.

According to the South Florida Water Management District, more rainfall was recorded between April and July 2013 than any other year since 1932. Big Cypress received twice as much rain between January and September 2013 than it did during the same period in 2012.

The rainfall restored groundwater levels but a lot of it ran off the land into canals.

The Environmental Resource Management Department is in the process of removing the growth by using long reach excavating machines, but they are also looking into chemical removal options either by boat or through aerial spraying.

“We will make a proposal to the water commission about aerial spraying,” said Cherise Maples, director of the Environmental Resource Management Department. “Chemical treatment is cheaper than mechanical removal, but it depends on how the community feels about it.”