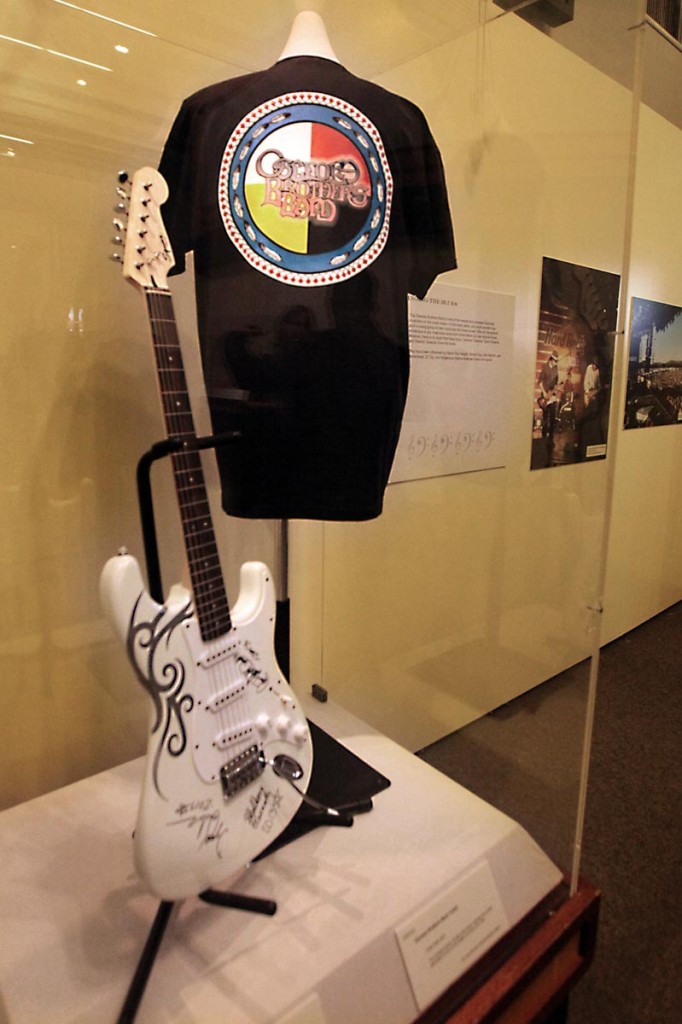 BIG CYPRESS — Without skipping a beat, the newest exhibit at Ah-Tah-Thi-Ki Museum is a historic journey of song from the humblest hymns that praise the Creator to the rap and rock that shouts about life today.

“Primarily, it’s Seminole people making music out of mainstream genres but putting the Seminole stamp on it,” said Rebecca Fell, the Museum’s curator of exhibits.

The show, called To Sing as a Group: Multiple Voices of Seminole Music, opened Jan. 17 at the Museum’s revolving exhibit hall.

Numerous archival items and memorabilia make up the tour.

First, the Tribe’s earliest documentation of musical influence features several Christian hymnals and song sheets. Lyrics presented by missionaries from Oklahoma were sung in Mikasuki. One of the songs, revered as the Native American Amazing Grace, traces back to the Trail of Tears.

The growth of music within the Tribe through the 1960s is depicted in pictures and memorabilia from the Rev. Paul Buster, of the locally popular Cowbone Band, and Chairman James E. Billie’s regional anthem Native Son.

Fell said Chairman Billie’s hit has been heard internationally, including by American troops serving in Iraq.

“Even for a new generation, we see how Seminole music is used to express emotion and pride,” Fell said.

To hear for themselves, Museum visitors can rest at two listening stations where headphones and iPods provide audible tastes of several genres – all by South Florida Native musicians.

Tribal members Zac “Doc” and Spencer Battiest, whose rap song The Storm was nominated for a 2011 Native American Music Award, provided the Museum with a handful of items, including a 2011 American Indian Film

Museum director Paul Backhouse said the exhibit reveals the essence of Seminole music “from the pioneering work of Chairman Billie to The Osceola Brothers.”

“We’re not only looking at historical moments; we’re interested in what’s next and how we can share that with the community,” Backhouse said.

The musicians presented are also highlighted in a looping Seminole Media Productions video that explores the historic endurance of Native American music and the evolution of music throughout the Seminole Tribe.

Kenneth Light, a tourist from Hershey, Pa., said the show was captivating.

“It’s pretty interesting to realize that the Seminoles have some famous musicians in the Tribe,” Light said.

Francisco Moreno, of Colombia, said he considered himself lucky to have “stumbled” into the first day of the show by sheer coincidence.

“I walked through the show, read every word and listened to all the music. It’s pretty amazing,” Moreno said. “I was pleasantly pleased to be here today.”