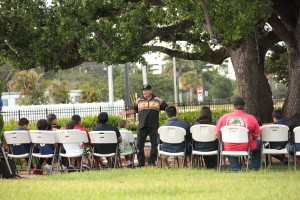 HOLLYWOOD — As the Hollywood Police Explorers prepare for their annual trip to Washington, D.C. – the seat of the federal government – they learned about the Seminole Tribe’s government and how it was established. Former Hollywood Councilman Max Osceola Jr. met the Explorers on April 9 under the Council Oak to share the history of the Tribe.

“Back in the 1950s, the Tribe sat under this tree and made some big decisions that affect you today,” Osceola said. “This is where the Tribe was formed; it is part of your history.”

Osceola told the kids about the “old days” when Tribal members lived in chickees and farmed nearby fields where the Classic Casino stands today. The Tribe was always organized but never had a formal government. Federal recognition by the U.S. government required the Tribe to create a constitution of their own.

Meetings were held under the Council Oak where members formed a committee to write a constitution and a charter. Tribal members voted to ratify their Constitution and Corporate Charter on Aug. 21, 1957.

“The Constitution is like a rule book on how we run the government,” Osceola explained. “It’s like rules of the game in baseball; it’s three strikes, not four. The rules are followed.”

The children learned that Tribal government, which was set up using U.S. Congress as an example, consists of a Council and a Board. Council members and Board representatives each have two-year terms; the Chairman of the Council and President of the Board have four-year terms.

“This tree saved our Tribe and let us plan for the future,” Osceola said. “You are the future. You need to go to school because we need you to learn how to run the Tribe.”

When the Tribe wrote the Constitution and Corporate Charter, they couldn’t envision the Hard Rock, but they knew an opportunity would come along to allow the Tribe to prosper, Osceola said. In 2007, the Tribe purchased Hard Rock International and subsequently owns 120 cafes, nine hotels and four casinos in 52 countries. A photo captured the moment when the Tribe signed papers allowing the purchase.

“We came back to the Council Oak to sign that resolution and now that photo is in every Hard Rock Café in the world,” Osceola said. “In 1957 our annual budget was $12,000. Today it is about $1 billion. We’ve come a long way, but we have to manage the money. You can’t spend it all today; you have to make sure to save some for tomorrow.”

Osceola told the Explorers some of them could be doctors, lawyers, professional athletes, entrepreneurs and more. But he also told them they could be successful business people just by working with the Tribe.

“This is a significant and sacred place and I’m proud to be here,” he said. “It’s the responsibility of the elders to teach the young. It’s your responsibility to know about the Council Oak and tell your children about it. Share your knowledge.”