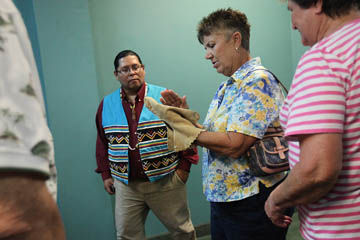 CLEWISTON — Delores Duncan, of Clewiston, remembers the mid-1950s when Seminole women dressed in patchwork clothing would come into town from Big Cypress Reservation for weekly shopping at Royal’s department store.

“They would sit with their children under the Australian pine trees where Corbin’s is now. It was interesting to see but most of them didn’t speak English – or at least not to us,” Duncan said.

On April 9, at the Clewiston Museum just off U.S. Highway 27, Duncan joined about 25 other locals at Clewiston Museum to honor their Seminole neighbors at the fifth annual Seminole Heritage Day. The event featured a history and culture lesson from Vandall Samuels, a community outreach specialist from Ah-Tah-Thi-Ki Museum.

Samuels presented spectators with a glimpse into early Seminole living in the Everglades through the slideshow “Seminole Camp Life – Turn of the Century.”

He explained how Native communities revolved around chickee camps, males were hunters and women were matriarchs, the Tribe survived on local plants and animals for food, and how thick cypress trees were hand carved into canoes for transportation.

“Girls had to earn a spot at the cooking fire … men spent days hand carving canoes from the biggest cypress trees,” Samuels said. “From all of what we learn, we get a better appreciation for what they put their hearts into for the survival of the family.”

After the presentation, attendees perused a collection of Seminole clothing, dolls, jewelry and camp tools.

The museum, one of 80 stops along the Big Water Heritage Trail that encompasses five counties surrounding Lake Okeechobee, was the original home of The Clewiston News. Built in 1928, it is one of the town’s oldest buildings and now also houses the Clewiston Chamber of Commerce. It features a 60-seat theater and a vast collection of fossils, photographs and artifacts that highlight the heritage of Hendry County.

Brenda Lopez, chair of the museum and a lifelong Clewiston resident, said the museum began formally honoring the Seminole Tribe in 2000 with proclamations and special activities during the annual Clewiston Sugar Festival. Began in the 1930s to herald the end of the sugar harvest, the festival this year was held April 9-12.

“We are all part of this community here, so we should be all about opportunities that show and share out cultures,” Lopez said.