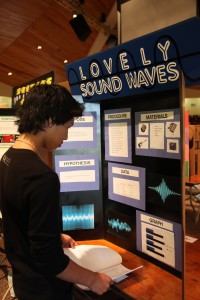 “I wasn’t nervous at all,” eighth-grade contender Michael Garcia said. “I already knew what I was going to be asked, and I just prepared for that.”

The students who represented the Charter School at the district level received either a first- or second-place ribbon in the school’s Science Fair to become eligible to compete.

“Those kids that went on today had a good grasp of the scientific method, and we knew they could be successful at this level,” said Renea Finney, Charter School science teacher who attended the event with Kelly Bass, PECS middle school math teacher. “Last night when we were looking at the projects as they were being checked in, Ms. Bass and I were high-fiving each other because our projects are really tops. We expect our kids to do very good.”

After placing in their school’s Science Fair, the Charter School students had less than two weeks to prepare for the Glades County District Science Fair, which was held at the Brighton Veteran’s Building.

“I had to do my whole book of experiments, but it was fun,” said Garcia, whose project measured sound waves. “I learned from my experiment, and I got to play my guitar.”

“They did a great job,” Thomas said. “It is always neat to see what kids come up with in their little minds, and this year’s had some interesting topics, some eclectic, neat little stuff. But what I really liked is that they take what they or their parents do, such as golf, and they turn it into a project. That’s always fun to watch.”

Thomas thanked the Seminole Tribe for their involvement in science and for furthering students’ interest in science by hosting the District Science Fair. He said it is great to see them put education at the forefront.

Students who take a first-place ribbon at the Glades County District Science Fair will be eligible to compete in the Regional Science Fair on Feb. 16 in Clewiston. The Regional Fair includes Glades, Okeechobee, DeSoto, Highlands and Hendry counties.

Thomas said he is confident that Glades County and the Charter School will be well represented at the State Science Fair, following Regionals.