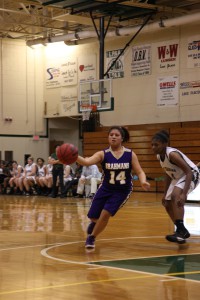 LAKE PLACID —The four Tribal hoopsters of Okeechobee High School are stepping up their games and looking forward to next season.

Varsity and junior varsity players Janet Smith, Jaide Micco, Delaney Osceola and Jenni Eagle closed out their 2012 campaigns on the road versus Lake Placid on Jan. 24 to cap off solid seasons for both teams.

As freshmen, Osceola and Eagle, who play guard and forward, will have plenty of time to hone their skills. The pair finished on a 10-6 junior varsity squad under first-year head coach Morgan Benion.
Benion said it has been a season of growth for both.

“They both started off very timid. As the season went on, though, they definitively improved,” Benion said. “Delaney has been a mainstay and big defensively. Jen had a lot more pep in her step and began to care a lot more as the season progressed.”

Osceola and Eagle of the varsity Lady Brahmans faced the Lady Dragons for a second time, winning convincingly 35-14 in an earlier season matchup. In round two, they came up short in a close 31-28 loss. Osceola pitched in with 4 points and averaged 8 points throughout the season. Eagle gave defensive help off the bench.

“I have enjoyed my family coming out and supporting me,” said an upbeat Osceola. She said an improved, positive attitude and developing her passing skills are next season’s goals.

With a three-win improvement compared to the 2011 season, the varsity Lady Brahmans (9-13) also had a rematch with the ladies of Lake Placid coming off a 56-36 win earlier in their season under second-year head coach Erin Morrow. In the end, however, the Lady Dragons would avenge their loss in a 54-40 win. Micco had extensive playing time but went scoreless. Smith did not play because of an injury.

Morrow said Smith has potential playing both guard and forward, as well as Micco playing guard.

“When they are focused and want to put in the work, they are two of our better players showing leadership, hustle and good skills,” Morrow said. “I would consider this a good season and we have improved. We are moving in the right direction for next season.”

“She’s improved since last year and is getting more aggressive,” Micco said. “She has also improved on her fundamentals in moving her feet more.”