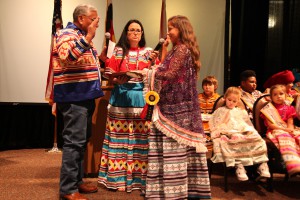 “I felt that our school can be even better than it already is and that we could use more help to get the school together,” Pierce said. “I feel good (about being elected). I think I can help out a lot.”

Each newly elected officer took a turn placing his or her left hand on a Bible, while raising the right and repeating the Student Council oath recited by Brighton Councilman Andrew J. Bowers Jr. Every student promised to serve as the best representative, to work hard and to learn Creek and Seminole culture.

“When you take oath, it has to mean something because you are on your word,” Councilman Bowers said. “So remember that and be a good example at the school.”

After they were sworn in, the elected officers received a sash from outgoing Student Council members. They then gave acceptance speeches in Creek.

To end the ceremony, elected officers formed a line for all students, teachers and parents to shake their hands and to formally welcome them as the Charter School’s new Student Council.